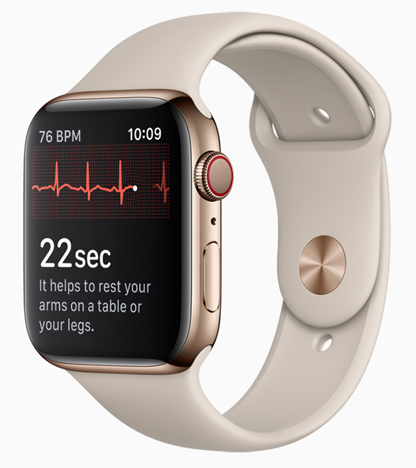 Apple is set to launch iOS 12.4 today along with watchOS 5.3, and with the latter, Apple Watch Series 4 users in Canada will finally get the ECG (electrocardiogram) app and irregular heart rhythm notifications (via MacRumors).

According to Apple, watchOS 5.3 will bring “improvements and bug fixes”, to go with security updates to the Walkie-Talkie app (Apple disabled the feature because of a security hole), plus the ECG app for Apple Watch Series 4 users in Canada and Singapore.

Health Canada previously noted it had approved two applications for Apple Watch heart features, while Apple also said back in May it was working to bring the ECG app to Canada “as quickly as possible.”

With Apple Watch Series 4, Canadians will be able to perform an ECG by placing their finger on the Digital Crown for 30 seconds while wearing the watch. The launch of the ECG app in Canada comes 10 months after Series 4 models went on sale last fall.

Electrodes built into the Digital Crown and the back crystal work together with the ECG app to read your heart’s electrical signals. Simply touch the Digital Crown to generate an ECG waveform in just 30 seconds. The ECG app can indicate whether your heart rhythm shows signs of atrial fibrillation — a serious form of irregular heart rhythm — or sinus rhythm, which means your heart is beating in a normal pattern.

Apple has started working on a 20-inch foldable OLED display, supposedly for a future MacBook Pro model, according to a report from The Elec (via MacRumors). This corroborates previous information from display analyst Ross Young, who said back in February that Apple wants to make a 20-inch foldable MacBook. The display is going to be 20.25...
Nehal Malik
9 mins ago