Described as a “great and fun way to share the gospel”, the Bible Emoji is a new iBook subtitled ‘Scripture 4 Millennials’ available for download on the iTunes store for $3.99, and interprets all 66 books of the King James Version with emoji and commonly-used internet slang and contractions. According to The Guardian, a computer program was used to automatically translate 200 corresponding words into 80 emoji characters. 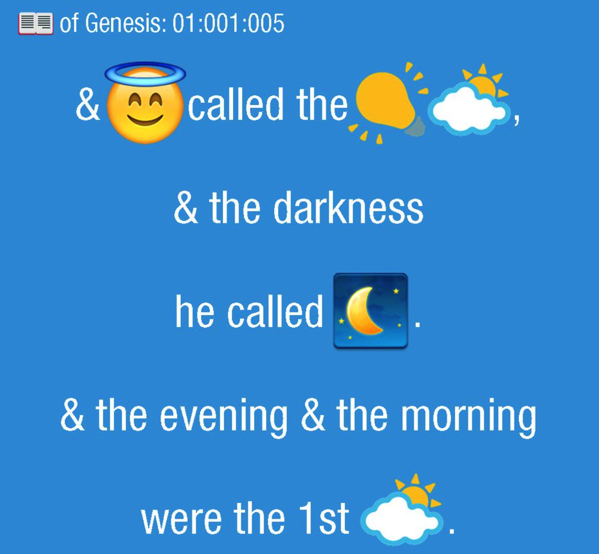 The translator told the source that he or she preferred to remain anonymous. “I thought if we fast forwarded 100 years in the future, an emoji bible would exist,” the book illustrator said. “So I thought it’d be fun to try to make it…I wanted to make it similar to how you might text or tweet a Bible verse, by shrinking the total character count”. Apparently, the reception has been largely positive, the author said.

The translator welcomed suggestions on how to improve the translation. Though he/she wanted to make the Bible available for Android, the book formats used by each platform presented problems: “Like Amazon for instance doesn’t support emoji.”

At nearly 3,300 pages in length, it’s likely to take a long while to read the Bible Emoji, even with the visual shortcuts. You can grab it using the following App Store link: