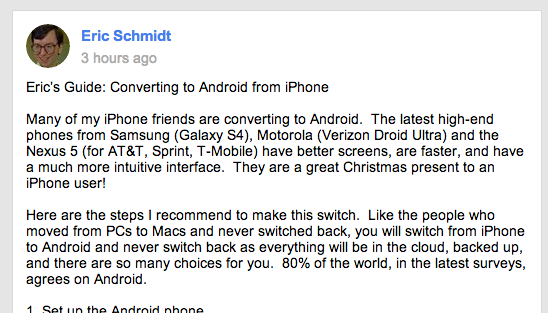 Google’s executive chairman Eric Schmidt has posted to Google+ an extensive guide on “Converting to Android from iPhone”. The post basically details how existing iPhone users can seamlessly move over to Android:

Many of my iPhone friends are converting to Android. The latest high-end phones from Samsung (Galaxy S4), Motorola (Verizon Droid Ultra) and the Nexus 5 (for AT&T, Sprint, T-Mobile) have better screens, are faster, and have a much more intuitive interface. They are a great Christmas present to an iPhone user!

Here are the steps I recommend to make this switch. Like the people who moved from PCs to Macs and never switched back, you will switch from iPhone to Android and never switch back as everything will be in the cloud, backed up, and there are so many choices for you. 80% of the world, in the latest surveys, agrees on Android.

Schmidt should be a comedian, especially with the following line he wrote “Like the people who moved from PCs to Macs and never switched back, you will switch from iPhone to Android and never switch back as everything will be in the cloud, backed up, and there are so many choices for you.” Oh really?

At the end of the day, Schmidt is just doing his job of pushing Android and Google as mobile platforms of choice, plus also pushing Chrome and Gmail over Apple’s equivalent services of Safari and iCloud email:

Be sure to use Chrome, not Safari; its safer and better in so many ways. And it’s free.
https://www.google.com/intl/en/chrome/browser/

Be sure to use two-factor authentication for your Gmail and Google accounts. Makes it very hard for someone to break into your Gmail. Also free.
https://support.google.com/accounts/answer/180744?hl=en

Schmidt sat on Apple’s board of directors back in 2006 and later resigned in 2009 due to a conflict of interest as he was simultaneously involved with Google’s Android platform.

Have you switched to Android from iPhone? Or have you recently switched back to iPhone from Android?