If you’re a sports fan and you love getting live updates, ESPN has launched their official app for the Pebble, which will includes scores from MLB, College Football, Men’s College Basketball, NFL, NBA and NHL.

Below is a screenshot of how NHL scores will look like on your Pebble: 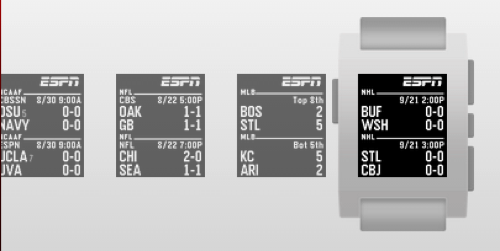 Here are the top features:

If you’re a sports junkie and crave real-time updates, this ESPN app might satisfy your need to stay up to date, all the time. All you’ll have to do is flick your wrist to get a real-time update on demand.

Today marks the official launch of Apple's iPhone 14 Plus. Rounding out the new family of Phones, preorders for the iPhone 14 Plus should be arriving to users around the world. However, for those that didn't pre-order, in-store pickup options are rolling out region by region. Currently speaking, if you navigate to Apple's website in...
Steve Vegvari
39 mins ago