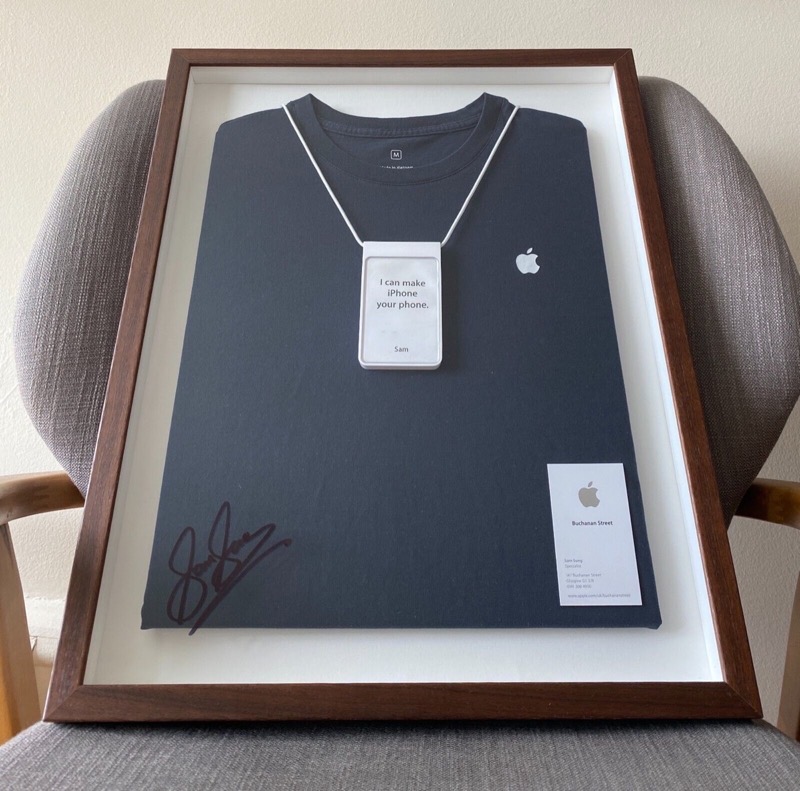 Former Apple Store employee, Sam Sung, now going by the name of Sam Struan, rose to internet fame in 2012 after a customer he helped at the Pacific Centre store in Vancouver, B.C., shared a picture of his business card online. 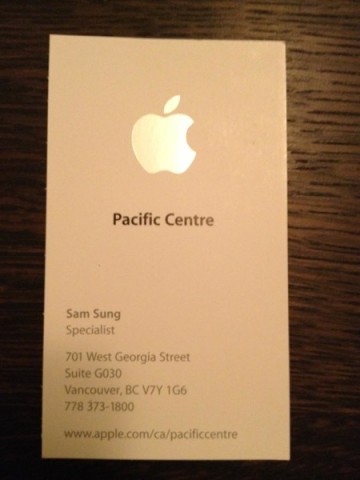 He departed from Apple one year later, but in 2014, he auctioned off his famous business card for charity, raising $2,500 CAD in funds, donated to the Children’s Make-A-Wish Foundation in BC & Yukon. That auction saw some fake bids pushing the price to $80,000 USD.

Now, Sam is doing it all over again after an old business card with his former name ‘Sam Sung’ from the Glasgow Apple Store was found and sent to him by a family member in Scotland.

“A family member recently found one of my business cards from the first and original store that I worked at – Apple Buchanan Street – and it’s in excellent condition! This is one of only two cards that I know to exist,” explains Struan’s eBay auction for the business card.

“Given the unexpected success we had with the Vancouver business card, I thought I’d try my luck again with another charity auction. This time, the final amount (minus eBay fees and shipping) will be donated to the Downtown East Women’s Shelter in Vancouver (or the winner can donate directly to them and I’ll ship the item to you),” says the former Apple employee.

Beyond the ‘Sam Sung’ business card itself, is a custom-framed Apple employee t-shirt and the last lanyard he had kept from working at the iPhone maker. “I’ve also signed the frame just for fun (not because I actually think I’m someone, I promise),” says Sam.

“I hope this card goes to a fellow Apple enthusiast who also wants to contribute to a great cause,” explains Struan.

You can check out the employee formerly known as ‘Sam Sung’s’ eBay auction here—it’s currently showing at $530 USD with 27 bids. The final amount will be donated to the Downtown Eastside Women’s Centre in Vancouver.