Facebook today has provided an update on how it plans to deal with its role in the Cambridge Analytica privacy fall out, as it now has revealed estimated numbers of people whose data may have been shared with the UK company.

According to Facebook, data of 622,161 Canadians may have been shared with Cambridge Analytica, out of a newly updated total of 87 million users seeing data leaked.

Previously, the total number of profiles leaked was pegged at 50 million according to The New York Times and The Guardian last month, but that total number has now surged by 74%. Will it keep going higher? (updated to note 50 million number was from NYT/Guardian).

Zuck saying that Facebook didn’t put out the 50 million number of users effected by Cambridge Analytica. That was NYT/The Guardian. So a big of hedging there on the 87 million number the company just put out today. 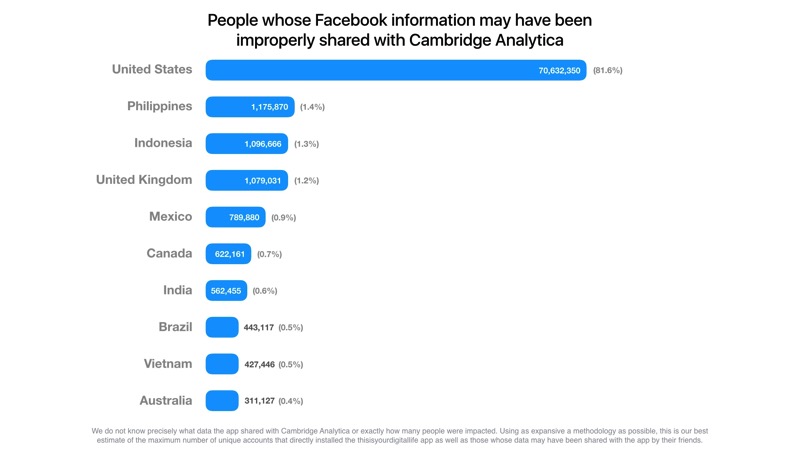 Facebook says “we do not know precisely what data the app shared with Cambridge Analytica or exactly how many people were impacted. Using as expansive a methodology as possible, this is our best estimate of the maximum number of unique accounts that directly installed the thisisyourdigitallife app as well as those whose data may have been shared with the app by their friends.”

The social network today has also placed restrictions on various APIs used by developers, now restricting access compared to before. The Events API, Groups API, Pages API all have more restrictions added, while the Instagram Platform API has been deprecated as of today, which some developers had noticed prior to today.

As for Facebook Login integration, the company will now approve all apps that request access to user information get approved by Facebook, while data requests for apps unused for the last 3 months will be revoked.

Facebook also says Search and Account Recovery has been revoked, to reduce people’s information being scraped. Call and Text History on Messenger and Facebook Lite for Android will now see all logs deleted over than one year.

Starting on April 9, Facebook says a new link will appear at the top of the News Feed within the iOS and Android app to let people see which apps are sharing their data, and remove ones if necessary. The company says it will also inform a user if their data may have been compromised by Cambridge Analytica.

Earlier today, it was reported Facebook CEO Mark Zuckerberg is set to testify before Congress in the U.S., as of next week. Expect him to face some tough questions from legislators regarding this major snafu embroiling the company.