Facebook has announced a new experimental app called ‘CatchUp’. Launching in a limited capacity, Facebook plans on utilizing CatchUp to assist users in seeing who’s available for an audio-only call.

Announced through a blog post, Facebook’s NPE (New Product Experimentation) team revealed its plans to launch CatchUp in the US. CatchUp will be a free standalone app that does not require the user to have an active Facebook account. 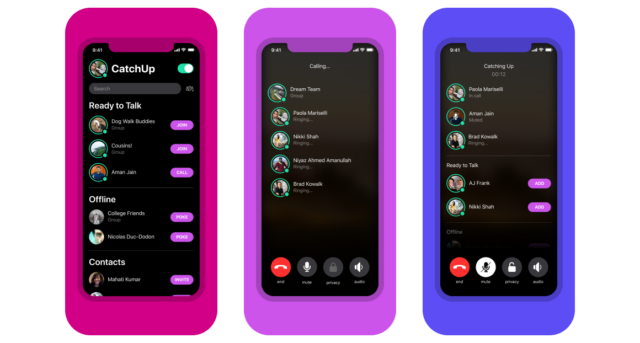 As group video calls and text chats have surged in popularity over the course of the year, Facebook hopes to ignite a flame to signal the return of the standard phone call. According to Facebook’s studies, the uncertainty of when a friend or family member was available played into the loss of popularity in the phone call. Via the blog post, a Facebook NPE rep said:

“We found that one of the main reasons people don’t call friends and family more frequently is that they don’t know when they are available to talk or are worried they may reach them at an inconvenient time. CatchUp addresses this problem, and even makes group calling as easy as one tap.”

For now, CatchUp will be available in the US on iOS and Android as it is being treated like an experiment on Facebook’s part. One can imagine that if the app begins to gain traction, CatchUp will begin to expand into other major territories around the world.