Facebook Announces its Biggest Redesign Ever at F8 Conference

Earlier today at F8, Facebook’s annual developer conference in San Jose, California, the social networking giant has announced the biggest redesign yet in its 15-year history, that not only replaces the iconic blue menu bar with a clean white design but also places a huge emphasis on Facebook Groups (via Business Insider). 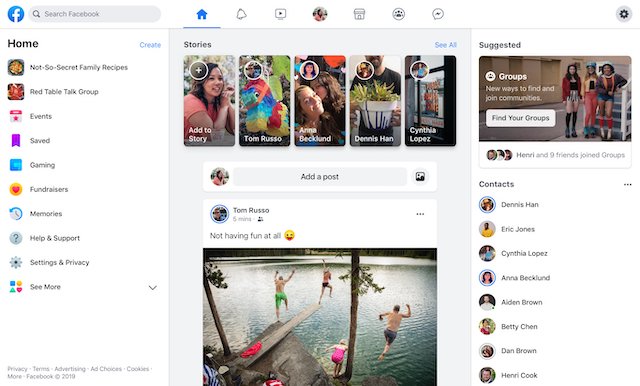 Continuing its efforts to prove that it has changed after two years of back-to-back privacy scandals, Facebook is now moving on with a fresh new look that more closely resembles that of the Messenger. The new design also gives Stories a more prominent placement at the very top of the feed.

Users can now post to groups directly from the homepage with new tools being added to specialized types of groups. Facebook says a redesigned mobile app will launch “right away” as well:

Facebook’s design has undergone countless revisions and changes throughout its history, often provoking temporary outrage by perturbed users. Tuesday’s redesign is a far more aesthetically significant shift than normal, however, finally ditching the blue bar that, in one form or another, has identified the social network since 2004.

Among tons of other new features, which should begin rolling out on desktop within the next few months, Facebook is also rolling out new tools to help users buy and sell things through Marketplace, including the ability to make payments directly on the Marketplace and handle shipping directly through the social network.