Facebook released information about its research into Instagram’s impact on teen girls and said the full picture shows the photo-sharing service has a largely positive effect.

After internal research surrounding the impact of Instagram on teenagers was made public in a Wall Street Journal report, Facebook has hit back, arguing that the report misunderstood not only the purpose of the report, but the results of the research itself.

In a press release published in its newsroom, Facebook argues that the WSJ report misrepresented the Instagram research by highlighting one negative finding about girls’ body images and omitting more positive findings on 11 other “well-being issues.”

“It is simply not accurate that this research demonstrates Instagram is ‘toxic’ for teen girls,” said Pratiti Raychoudhury, vice president and head of research at Facebook, said in the press release. “The research actually demonstrated that many teens we heard from feel that using Instagram helps them when they are struggling with the kinds of hard moments and issues teenagers have always faced.” 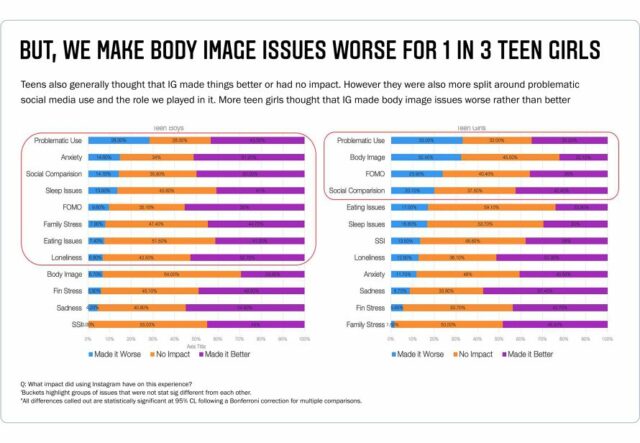 Facebook also rebutted “implied” claims it was hiding this research, claiming it has spoken openly about the negatives of social media as well as its benefits for over a decade.

“Our internal research is part of our effort to minimize the bad on our platforms and maximize the good,” Raychoudhury wrote. “We have a long track record of using our research — as well as external research and close collaboration with our Safety Advisory Board, Youth Advisors and additional experts and organizations — to inform changes to our apps and provide resources for the people who use them.”

Facebook’s general defense to WSJ‘s revelations basically boiled down to the good outweighing the bad, with more surveyed teens considering Instagram’s impact to be positive than negative. The company also stressed that, in addition to contextual considerations of the data, their research itself should be put into context.

Find Facebook’s findings over at its newsroom.