Facebook has is rolling out Messenger Day today globally, which is their take on Snapchat Stories. The new feature lets users make public or private pictures or videos to share, which disappear in 24 hours. 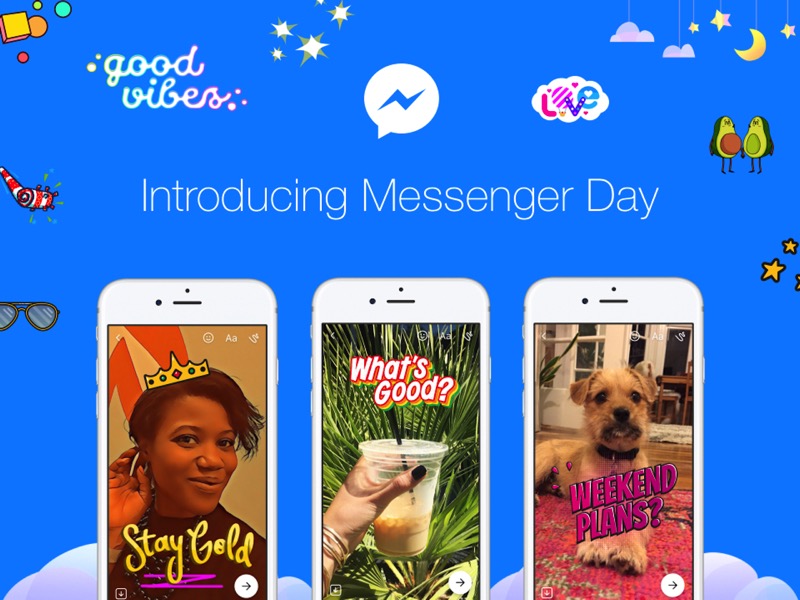 According to Facebook’s VP of messaging David Marcus, in an interview with TechCrunch, the new feature will “probably” include ads between posts, to start making money for Messenger for the first time.

When users share to their My Day, those viewing can respond privately, while also an ‘Active Now’ green dot also shows when friends are online, and available for chat.

What makes Day unique, according to Facebook, is their searchable, categorized filters, which aim to make it easier to get friends to hang out in real life. Custom pre-made filters such as “Movie night?”, “Let’s grab drinks”, or “Let’s go for a run” are available, but also an option is there to turn any text into a filter too.

Facebook now has added these Snapchat-likes features with Instagram Stories, a recent update to WhatsApp, and now Messenger Day. Time will tell who will win the disappearing messaging wars, but for now Snapchat is the one to beat.

The update to Messenger for iOS to include this update for Day is rolling out in the App Store, so keep an eye out for it.

Eero, an Amazon company, has just announced a new range of WiFi solutions, including eero PoE 6 and eero PoE Gateway Power-over-Ethernet (PoE) devices, for setting up faster, reliable WiFi networks at homes and businesses. The eero PoE 6 is a dual-band Wi-Fi 6 PoE access point that provides up to 2,000 square feet of coverage...
Usman Qureshi
32 mins ago

Amazon today announced at its special event an update to its best-sounding Echo speaker, the Echo Studio. This speaker is now available in Glacier White, joining Charcoal, while it also gets some enhanced audio technology updates, that will be available for all existing and new users. New custom spatial audio processing technology and frequency range […]
Gary Ng
40 mins ago