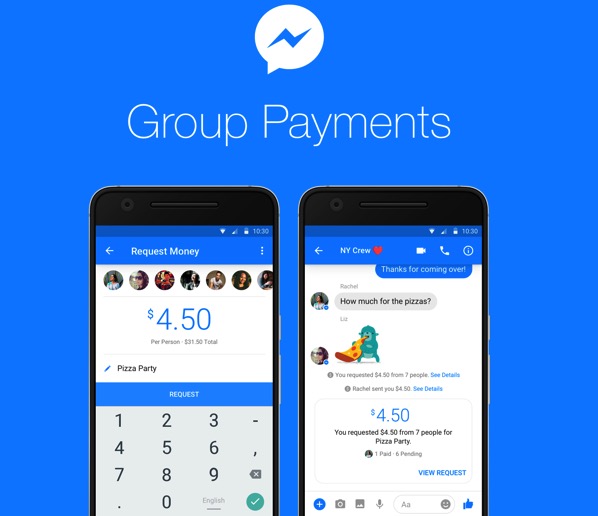 While person-to-person payments have previously been possible via Facebook Messenger, the company has today announced the ability to send or receive money between groups of people on Messenger in the U.S., making it easy for users to split a restaurant bill or chip in for a group gift.

The whole process is simple, fast and free, with users only required to go to a new or existing Messenger group conversation to get started. Here’s how it works:

Simply tap on the plus sign in the bottom left hand corner of a group conversation to find more features, and tap the payments icon ($). Then, choose who to send or request money from. You can choose everyone in the group or only a few members. Enter the amount you want to request per person or the total sum to divide evenly, either including yourself in the calculation or not. Finally, you can specify what the money is for — maybe a pizza party, teacher gift or more. Once you’re ready, tap Request.

To make it easy to keep track of everything, a message will appear in the group conversation showing who has paid. At any time, you can also view the Request Details in full-screen. As always in Messenger, you don’t need to remember a password, your debit card information is secured encrypted, and the service is totally free.

Messenger group payments is available in the US for now, with more information available at this link.