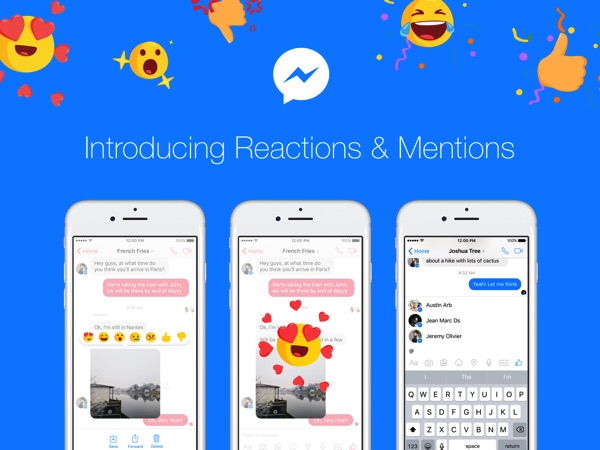 With more than a billion users worldwide, Facebook Messenger is a widely adopted communication channel. And today Facebook has announced two new features that could make this messaging app more helpful.

The first feature is Reactions: You are already familiar with the Reactions feature from the Facebook app. Now you can react to a message by selecting either love, smile, wow, sad, angry, yes and no emojis.

The reaction will be visible in the lower corner of the message, alongside a number indicating how many people have reacted to the message. You can go deeper by tapping on the emojis and see which member of the conversation reacted which way. Facebook Messenger will also notify you about who has reacted to your message and how.

A more useful feature is Mentions: If you are talking with a group of people, you need to go through all the messages, and you might miss one that was intended to you. But not with Mentions: You’ll be notified that you have been called out specifically and you can easily jump right back into the conversion to answer the question.

To mention someone, all you need to do is type the “@” symbol or start typing the first few letters of the name or nickname of the person you want to notify, and select them from the list.

The above features will also be available for Work Chat in Workplace and will begin rolling out today. Global availability is expected in the next few days.

Google appears to be working on a new web browser for iOS based on the tech giant's own Blink engine instead of Apple's WebKit, in violation of the App Store Review Guidelines — reports The Register. The in-development browser was referenced in a recent Chromium bug report, but Google says it won't actually release it....
Nehal Malik
14 mins ago