Facebook News Launches in the United Kingdom, First Country Outside of the US 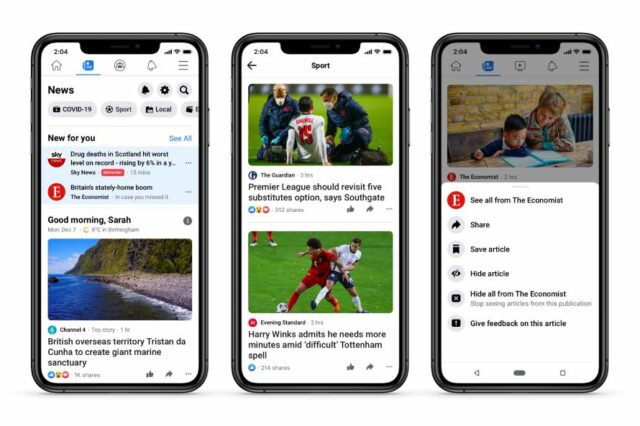 Facebook has launched its curated news tab Facebook News in the United Kingdom, making it the first market outside of the US to receive support for the new feature.

Announced this week, Facebook will be adding a dedicated portal within the Facebook app to UK users on iOS and Android. The Facebook News portal will feature licensed content from credible local and national news and media outlets including Channel 4 News, Sky News, The Guardian, GQ, Cosmopolitan, Vogue and many others.

“The product is a mix of curated, top stories and personalized links chosen by algorithm,” a spokesperson said in TechCrunch‘s report. There’s been no word on the financial aspect of the deal inked between Facebook and Upday. However, the licensing deals Facebook has in place with some of the major news outlets reach “the tens of millions of pounds”.

Google today unveiled its long-rumoured smartwatch, the Pixel Watch, during the 'Made by Google' launch event. Pixel Watch features a circular design with a curved top that gives it a dome-like appearance. The screen is protected by a Custom 3D Corning Gorilla Glass cover that's tough and scratch-resistant. Google's Pixel Watch comes with an always-on...
Nehal Malik
26 mins ago