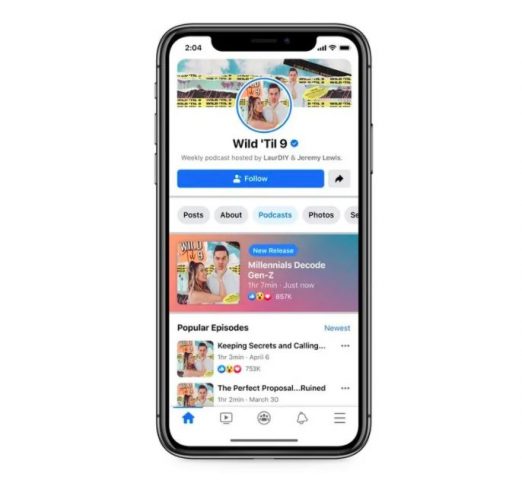 Facebook is launching its own podcast publishing platform, allowing content creators to link their show’s RSS feed to Facebook. This comes at a time when Spotify and Apple are double downing on their own podcast platforms with additional support to podcasters.

Emails from Facebook were sent to content creators of which had podcasts pages established on Facebook, according to a report from The Verge. The messages stated that the new podcast platform will be launching on June 22. Once available, podcasters can link their RSS feed to Facebook and a News Feed post will be created for every new episode published.

As stated by Facebook within the email, “Facebook will be the place where people can enjoy, discuss, and share the podcasts they love with each other.”

In April, Facebook announced that it was looking into multiple “social audio” initiatives, including ways to compete with Clubhouse. Additionally, the social media company was looking at incorporating a designated ‘Podcasts’ tab. Podcast episodes will now appear on this tab upon the rollout later this month.

Facebook will also be providing a way for podcasters to create clips from their shows. Similar to Twitch clips, short one-minute-long clips can be extracted from a show and shared to their audience.

News of this comes at a time when Apple just launched its paid podcast subscription model for creators. While enabling podcasters to support paid-content to their listeners, Apple does take a 30 percent cut of each subscription paid during the first year. The commision then drops to 15 percent afterwards.

Spotify has also been making commitments to its podcast platform. Although Spotfity doesn’t collect any commision, the company does offer a similar subscription to content creators. The company has also been fairly agressive in signing exclusivity deals with podcasters and hosting them on the app.