Apple Podcasts Subscriptions Rolls Out and is Now Available 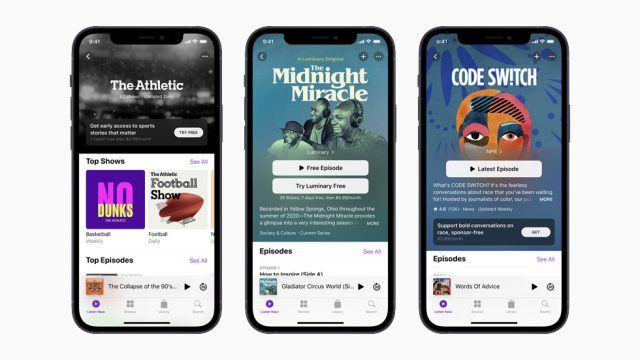 Today marks the day that Apple rolls out its podcast subscriptions. Starting June 15, content creators can begin to receive monthly support by way of subscriptions through listeners directly through the platform.

Back in April, Apple announced its plans to introduce Apple Podcast Subscriptions for podcasters and content creators. During its April event, Apple stated that it intended to release the subscription model in May. However, it was later delayed in order to fully polish the experience for those involved.

Apple Podcast Subscriptions will be launching in 170 regions around the world. Listeners can choose to begin supporting their favourite content creators and gain access to special perks. These perks range from accessing an ad-free listening experience to being able to listen to bonus content from the creator. It’s worth noting that perks are only accessible through Apple’s Podcast app. Perks will not be transferable to other podcast feeds and clients.

As expected, the Apple Podcast Subscription will be handled under Apple’s 30 percent commission structure. Creators and podcasters will receive 70 percent of each subscription while 30 percent will go directly to Apple.

On top of rolling out the Apple Podcast Subscription, it’s been reported that Apple will look to improve the Podcasts app following the release of iOS 14.5, which introduced a handful of minor issues for listeners.