Faceboook and Ray-Ban have joined forces to release a stylish pair of sunglasses and they’re packed with features. 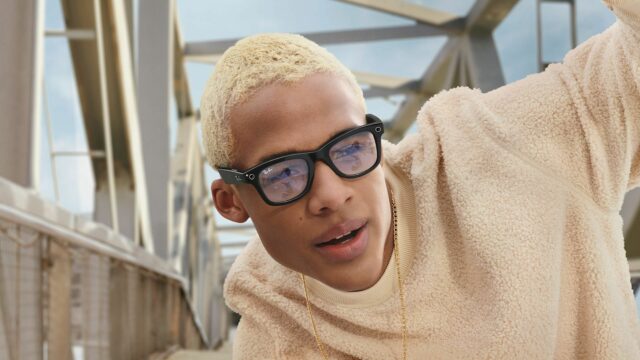 Smart glasses aren’t necessarily a new concept, but despite Snapchat’s efforts with Spectacles, no one has really managed to make them a mainstream success as of yet. Facebook is hoping to change that tune, though, with the first collaboration from its partnership with Ray-Ban.

“Ray-Ban Stories” are the result, a new line of sunglasses that pack twin 5MP cameras, speakers, and microphones for calls, and touch controls to let you record your point of view whenever you like in still images and video, ready for sharing however you like.

The $299 USD glasses have three main “smart” features: they can record photos and 30-second videos via dual 5-megapixel cameras, they can play “open-air” sound without headphones, and they allow users to take phone calls.

In addition to coming in several styles and colours, they can be made as sunglasses or untinted lenses, prescription, and even progressive lenses.

Photos and videos are shared only to a companion smartphone app, Facebook View, where the owner can then decide whether and where to share the images and videos.

Perhaps what’s most notable about the Ray-Ban Stories is what they’re not: AR. The glasses have no augmented reality features of any kind, unless you count a single indicator LED on the inside of the frames. All in all, they’re simply a pair of Ray-Ban glasses with a built-in Bluetooth headset and a camera that can be controlled by voice.

In a recent earnings call, Zuckerberg said the glasses would have Ray-Ban’s “iconic form factor” and would “let you do some pretty neat things.” He also commented that he was looking forward to “full augmented reality glasses in the future.”