Back in August, Instagram debuted the “Stories” feature, which many believed was a direct copy of a similar feature from Snapchat, right down to the name. Now, its parent company Facebook is doing the same by rolling out short user-generated photo and video montages that disappear after 24 hours, Recode reports. The “test” feature is currently live in Ireland only, the same market where Facebook is testing some other Snapchat-like features as well. 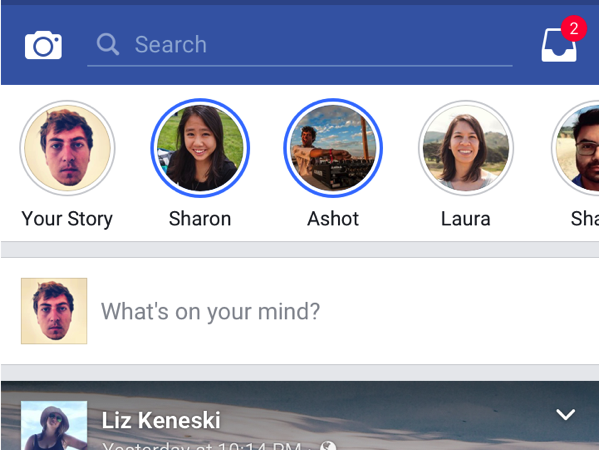 A Facebook spokesperson told the source, “We’re hoping to bring Stories … to the rest of the world in the coming months”, suggesting it won’t be long before the Facebook Stories feature becomes available globally. Instagram has already seen a lot of success with the feature, claiming that 150 million people use it every day, which is a group as large as Snapchat’s entire user base.

Instagram product boss Kevin Weil recently told Recode that Stories is a format he expects a lot of people will start using, similar to how the hashtag (which started on Twitter) is now widespread online. “[We] built on a format that Snapchat invented,” Weil admitted in late December. “We believe that format will be universal.”

Still, Facebook has not been subtle about its efforts to stomp out Snapchat. It spent most of 2016 cloning Snapchat features, and Stories is yet another sign that CEO Mark Zuckerberg is worried about Snapchat’s rise.

Facebook Stories will also provide another way for the company to make money from its 1.8 billion users.

Apple announced on Monday its music streaming service now has 100 million songs in its library. Apple said, “Twenty-one years on from the invention of iTunes and the debut of the original iPod, we’ve gone from 1,000 songs in your pocket to 100,000x that on Apple Music. It’s phenomenal growth by any metric. The entire […]
Gary Ng
12 mins ago

According to a report from Reuters, an administrative court in Italy has overturned a combined €200 million ($195.3 million USD or $268.23 million CAD) fine imposed against Apple and Amazon by the Autorita’ Garante della Concorrenza e del Mercato (ACGM), the country's antitrust authority, following an appeal. The fine in question was levied on the...
Nehal Malik
50 mins ago