Facebook Developing a Way to Let You Type With Your Thoughts 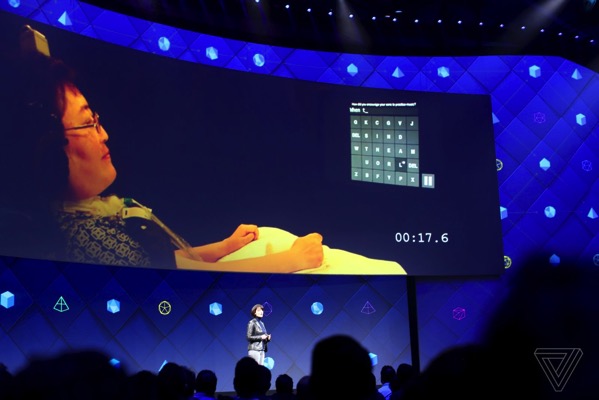 A project unveiled today by Facebook from its secretive Building 8 research group shows the company is developing a brain-computer interface that lets you type with your thoughts at speeds much faster than physical typing, The Verge reports. Regina Dugan, the former head of Google’s experimental ATAP research group and currently heading up Building 8, announced the news today onstage at Facebook’s F8 developer conference.

The goal is “something as simple as a yes-no brain click” that could fundamentally change how we interact with and use technology. While it does not exist today outside of very specific medical research trials, Dugan says her team is actively working to make it a reality.

Dugan refers to the technology as a “brain mouse for AR,” meaning it could be an ideal way to receive direct input from neural activity that would remove the need for augmented reality devices to track hand motions or other body movements.

Just as Microsoft’s HoloLens uses hand tracking to let you tap your finger in front of you as if you were clicking a mouse, Facebook’s device could act as a “speech prosthetic” for people with severe paralysis, explained Dugan. Facebook says researchers at Stanford have created a system for letting a paralyzed patient type eight words per minute using only her thoughts, although that example is with an invasively implanted electrode array.

Facebook says it has no plans to ever produce an invasive implant of any kind, so the company’s technology won’t be going inside the skulls of patients in need or any prospective healthy user of the technology in the future.