Back in July, Apple’s plans for first-party iBeacon hardware were revealed for the first time in an FCC filing, showing a piece of hardware with a diameter of 5.46-inches, working on 2.4GHz frequency. Now, a user manual, among other documents, released by FCC has given out more information to the public regarding this unreleased hardware, showing that this iBeacon hardware was meant for developers, presumably to test iBeacon integration in their own apps (via 9to5Mac). 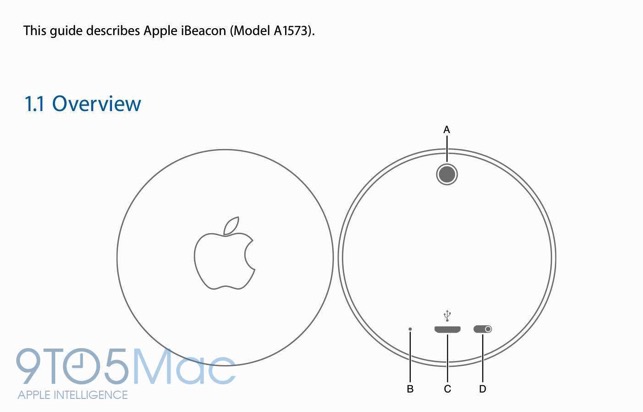 The source reports that the iBeacon mounts to a wall with a standard screw, and has an LED on the underside which reports battery condition and general status. The battery is said to last for several months and can be recharged via micro-USB. There is also a switch located on one side that allows the device to be reprogrammed, so it can be configured as necessary. Furthermore, an accompanying Apple iBeacon app can be used to control the device, though there are no images of what the app looks like.

“The rest of the document, which can be found on the FCC website, covers boilerplate warnings about safety and cleaning. Unsurprisingly, pricing details are not mentioned. Maybe the Apple iBeacon will see the light of day eventually. The current state of beacons is very fragmented, with different iBeacon makers offering productions with varying advantages and downsides”.