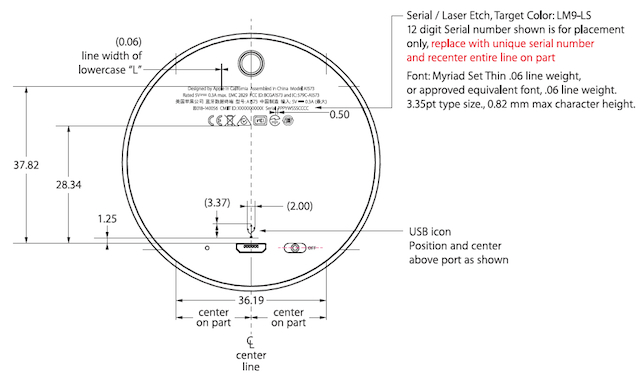 According to a report from TUAW, electronics company Securifi has discovered FCC filings which reveal Apple’s plans for first-party iBeacon hardware. The device has been registered as “Apple iBeacon” and has a model number of A1573.

The documents filed by Apple reveal that the iBeacon hardware was tested at the beginning of May in collaboration with Audix Technoloy, an electronics company based in China.

The hardware that was tested has a diameter of 5.46-inches and works on the 2.4GHz frequency, which is in line with the Bluetooth standard.

Apple originally introduced their iBeacon technology at WWDC 2013. The technology enables iOS devices to communicate with Bluetooth transmitters in order to deliver relevant information to the user’s phone when they are nearby a product or service.

In February, Apple introduced a MFi (Made for iPhone) iBeacon specification, which specified how the company intends to use the Bluetooth-based technology.

Currently, the most common use for iBeacons are in retail stores and live sporting events. Apple has started to integrate iBeacon technology into its retail stores, giving customers more relevant information when they walk in or approach a specific product.

The MLB has also started to use iBeacons to enhance the experience at their live events. Any company who wants to use Apple’s iBeacon technology currently has to use third-party transmitters. However, based on the latest filing, Apple may be looking to create its own hardware.