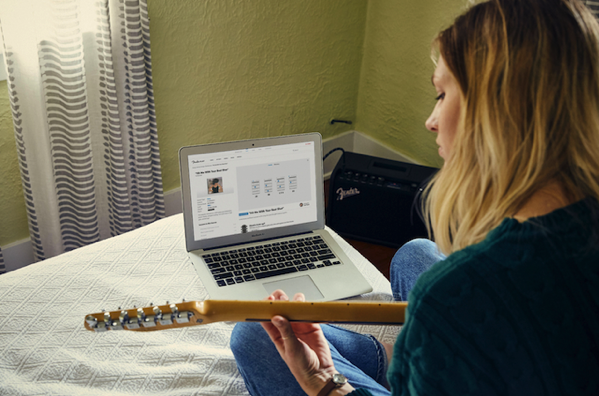 ‘Fender Play’, a new subscription-based app and guitar teaching platform is launching today, with an aim to become your new source of guitar lessons. According to CNET, the $20 a month subscription offers lessons in both acoustic and electric guitar, spanning multiple genres, while also licensing well-known songs as the basis for its lessons, from groupls like Foo Fighters to Carrie Underwood.

I’m not a guitar player. When I sat down to briefly try Fender Play in New York, I was, perhaps, Fender’s ideal customer. I only tried one brief lesson, and I ended up learning a simple riff on an acoustic Fender guitar. But I have used plenty of fitness trackers. In a sense, fitness trackers are like guitars: People get them aspirationally. And, eventually, maybe forget about them. The Fender Play app keeps a user profile, adds goals and tracks progress. It has achievements.

“We believe that getting people through the first song is the key. We provide them with the path to that, which will require you to learn technique”, said Fender CEO Andy Mooney, adding that the service provides users with the path to that while keeping things interesting.

The Fender Play iOS app offers artist and genre search for its catalog of songs, and bookmarks progress over time, but requires LTE or Wi-Fi to use. The service is also accessible via desktop at play.fender.com.