Back in October Fitbit announced its new fitness trackers, the Charge HR and GPS-equipped Surge, the next generation of wearables from the company. These devices are now available for pre-order from major Canadian retailers such as Future Shop, Best Buy and Amazon.ca.

The Fitbit Charge HR is priced at $169.99, while the larger Surge is available for $279.99 from both Future Shop and Best Buy, with an estimated release date of January 23, 2015. Amazon.ca has the Charge available for $169.95 as well but it’s out of stock. (UPDATE: We made an error and corrected the pricing of the Charge HR from Amazon.) 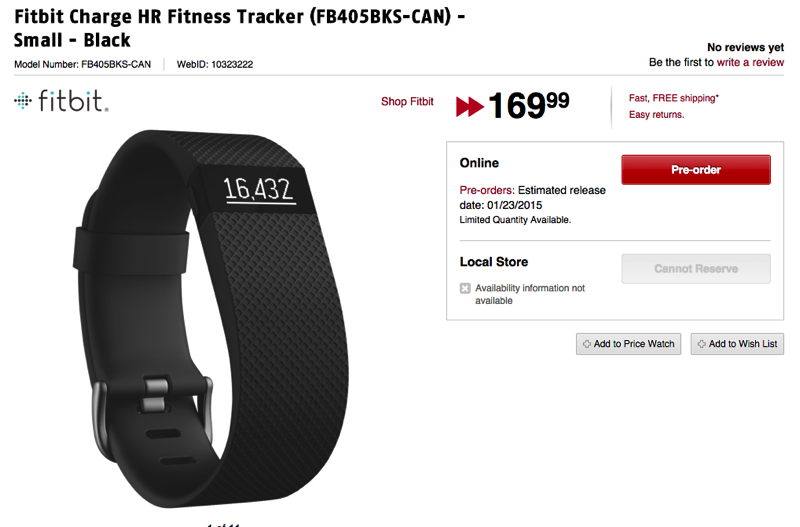 The Surge is much more expensive as it displays text and phone notifications, on top of measuring all of your activity data such as sleep monitoring, heart rate, steps, GPS location data and more.

In the meantime, we’ll keep an eye out for Fitbit Flex deals as they’ll most likely be cleared out to make way for these newer models. The lowest price we’ve seen was $79.99 around Black Friday and Boxing Day.

For the price of $280 though, you may want to wait and see how much the Apple Watch will retail exactly for when it debuts in Canada sometime in 2015 (the entry Sport model will debut at $349 USD in the U.S.).

Instagram may be looking into introducing a paid verification system. According to code found by reverse engineer Alessandro Paluzzi, the social media platform may already be looking to integrate a similar feature to Twitter's. As first reported by TechCrunch, evidence of a paid verification system within Instagram's code has been explicitly discovered. Paluzzi found snippets that say...
Steve Vegvari
13 mins ago