The US started their iPhone 4 pre-orders on Tuesday that ended with over 600,000 sales. We all know about how eager people are to be the first to buy an iPhone 4, but one Apple fan is taking his desire to the limit (and beyond).

Enter stage left, Justin Wagoner, who has already started camping outside the Knox Street Apple Store in Dallas. Mr. Wagoner is determined to last 6 days till the iPhone 4 launch. To be quite honest, I think Justin needs to give his head a shake or take up a hobby.

Check out the following video interview:

When will we see the first iPhone 4 camper in Canada? It might take a while as the release date for the iPhone 4 in Canada remains to be announced. 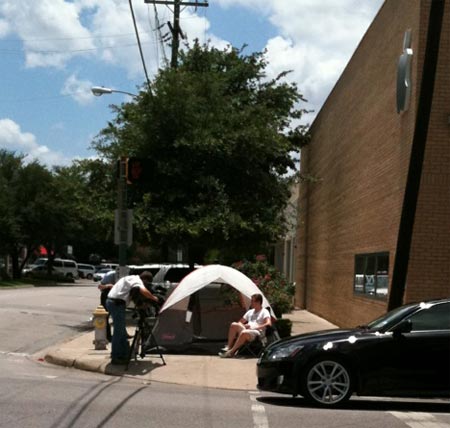 Would you camp out for more than a day to get your hands on Apple products? Or is that just taking it one step too far?

During the company’s Galaxy Unpacked event, Samsung officially revealed its two new foldable devices. The Galaxy Z Flip 4 and Galaxy Z Fold 4 have both been shown off in full and are now available to preorder. The year’s foldable refresh from Samsung includes a new iteration of its Z Flip and Z Fold line....
Steve Vegvari
31 mins ago