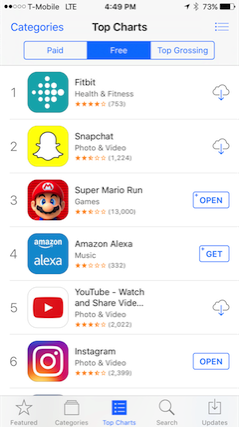 As pointed out by Re/Code, Fitbit’s iOS app became the top free app in the App Store yesterday, suggesting the company has sold a big number of its popular fitness trackers this Christmas. At the same time, Amazon’s Echo also appears to have been popular, with its Alexa app coming in at No. 4.

“There must have been a lot of Fitbit trackers under the Christmas tree. Its app rose to be No. 1 among free apps on Apple’s iOS app store on Sunday. The other top spots were filled by apps not associated with Christmas presents, such as Snapchat, Super Mario Run and YouTube”.

In the Canadian App Store however, the Fitbit iOS app came in at number 2, with Super Mario Run taking the top spot among free apps.

Did you also get a Fitbit tracker this weekend?

Today Apple announced its Q1 2023 earnings, reporting $117.2 billion in revenue and net income of $29.9 billion for the December quarter. Revenue was down 5% year-over-year, affected by production disruptions in China due to COVID-19. Apple CEO Tim Cook told Reuters in an interview that production disruptions are essentially over, as they “lasted through […]
Gary Ng
13 mins ago