According to latest data from the International Data Corporation (IDC), the overall wearables market grew 3.1% year over year in the third quarter of 2016, with total wearables shipments reaching 23 million. Fitness trackers accounted for 85% of the market and experienced double-digit growth, while the smartwatch market took a tumble during the same time period. 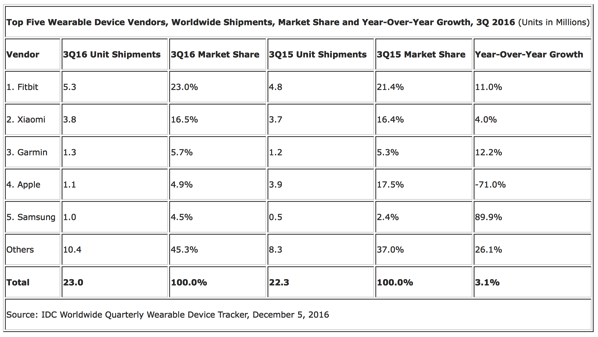 The data shows that increasing sales of fitness trackers may be attributed to the launch of newer models, an expanding user base, and “an enticing summer season that allowed people to step out of their homes”. IDC expects the momentum for basic wearables to continue for the remainder of 2016 throughout the holiday season. At the same time, smart wearables will likely continue to struggle.

Fitbit was once again the market leader in Q3 2016, following by Xiaomi and Garmin. Apple’s decision to launch its second-generation watches in mid-September, towards the end of the quarter, did contribute to its year-over-year decline.

“It’s still early days, but we’re already seeing a notable shift in the market,” said Jitesh Ubrani senior research analyst for IDC Mobile Device Trackers. “Where smartwatches were once expected to take the lead, basic wearables now reign supreme. Simplicity is a driving factor and this is well reflected in the top vendor list as four out of five offer a simple, dedicated fitness device. Meanwhile, from a design perspective, many devices are focusing on fashion first while allowing the technology to blend in with the background.”