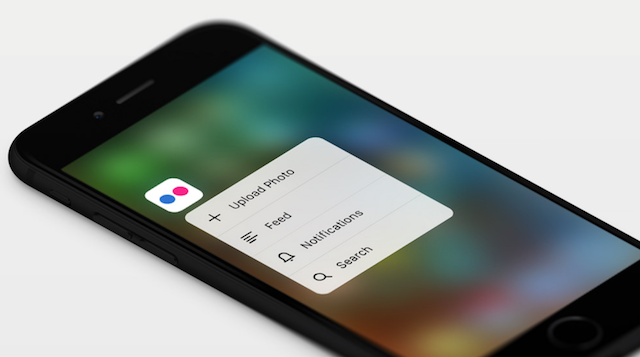 Flickr for iOS has today been updated to support 3D touch on iPhone 6s / 6s Plus as well as the spotlight search feature in iOS 9. The updated app enables users to preview photos, people, notifications and more with a light press of their screen. Furthermore, a new 3D Touch gesture inside the Flickr Camera Roll lets users find their best shot.

“Lightly press a photo to see a preview, then move your finger left/right to page through neighboring photos. Once you’ve found your favorite, press harder to Pop full-screen.

Using Spotlight search in iOS 9, search for albums, groups or recently-viewed photos without even opening the Flickr app.”

Using 3D Touch “Quick Actions”, users can do the things they do most often faster and in fewer steps. Lightly press the app icon to upload a photo, skip directly to notifications or the feed or to kick off a search right from the homescreen.

The update also brings the much awaited universal link support, which means links you send or receive will now open directly in the Flickr app, instead of as a web page in Safari. You can grab the free update at the following App Store link: