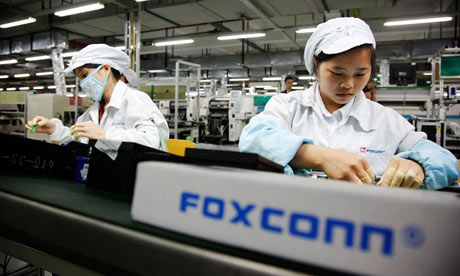 It appears some serious labour violations have occurred with Foxconn, one of Apple’s main suppliers for its iOS devices.  According to CNET, the company’s own internal audit revealed some intern workers under the legal working age of 16:

The company has issued a statement saying that it performed an internal investigation at its Yantai facility in the Shandong Province, and found that some of the interns working there ranged in age from 14 to 16 years old. China’s legal working age is 16.

“This is not only a violation of China’s labor law, it is also a violation of Foxconn policy and immediate steps have been taken to return the interns in question to their educational institutions,” the company said in an e-mailed statement to CNET. “We are also carrying out a full investigation, in cooperation with the respective educational institutions, to determine how this happened and the actions that must be taken by our company to ensure that it can never happen again.”

Back in February, during the FLA’s inspection of the one of Foxconn’s plants (which ABC just coincidentally show up at), there was some speculation underage workers were removed prior to the inspection.

In early September, the company was accused of employing underage student interns to assemble the iPhone 5, which they quickly responded to. Nevertheless, this is not good news and it looks like Foxconn is once again in damage control.