Future iPhones to Have Built in Unified SIM Cards?

A recent report from GigaOM reports that according to European carriers, Apple is planning on having a built in SIM card with next generation iPhones. What does this accomplish? It will allow consumers to select their mobile provider at an Apple retail store, and bypass carrier stores or calling in.

Wait a minute…hasn’t this been the case in Canada since the launch of the iPhone 4? We were lucky enough to have the iPhone 4 available from all three major carriers: Rogers (Fido), Telus, and Bell. Consumers were able to do hardware upgrades (HUP) within Apple Stores and even buy factory unlocked units outright. With this new “built in SIM” system, the process of activating an iPhone will be even easier as the rumour is that an app via the App Store will activate your iPhone.

Sources inside European carriers have reported that Apple has been working with SIM-card manufacturer Gemalto to create a special SIM card that would allow consumers in Europe to buy a phone via the web or at the Apple Store and get the phones working using Appleâ€™s App Store.

Itâ€™s rumored that Apple and Gemalto have created a SIM card, which is typically a chip that carries subscriber identification information for the carriers, that will be integrated into the iPhone itself. Then customers will then be able to choose their carrier at time of purchase at the Apple web site or retail store, or buy the phone and get their handset up and running through a download at the App Store as opposed to visiting a carrier store or calling the carrier.

I’m surprised this hasn’t happened yet, as the amalgamation of individual carrier SIM cards would be a blessing. Gone would be the days of fumbling with your carrier’s SIM and traveling overseas could be a lot easier too. By pushing out carrier stores, it will eliminate one extra step to acquire your iPhone.

What do you think? Are built in unified SIMs the way of the future? If it is, we can expect a company like Apple to ‘introduce’ it to the world. 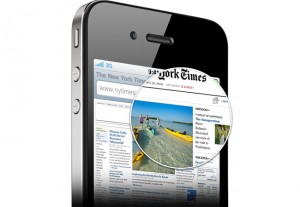