Apple is adding new Sound Packs to GarageBand that includes sounds from famous artists and producers. 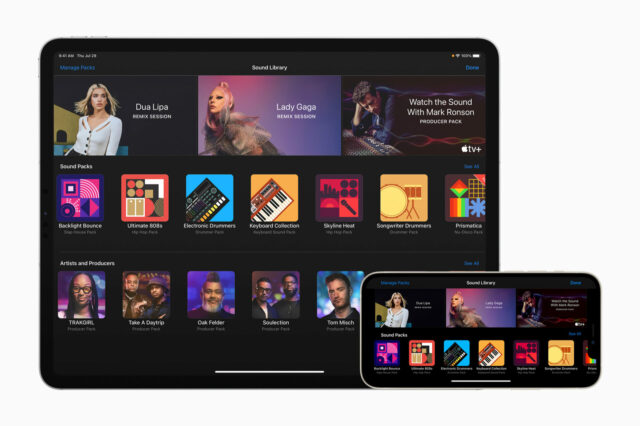 A new post over at Apple’s Newsroom explains that the new update for GarageBand iOS and iPadOS includes “Producer Packs,” template sessions, and music-making tutorials from artists like Dua Lipa, Boys Noize, Tom Misch and TRAKGIRL.

Oak Felder, producer of Ariana Grande, Demi Lovato, and John Legend, among others, says, “Whenever someone asks me how to start producing and making beats, I tell them to grab their iPhone and open up GarageBand. It removes all the technical obstacles and makes it easy to turn a simple musical idea into something great.”

Alongside the sound packs, Apple is also adding new “Art of the Remix” templates with Dua Lipa and Lady Gaga, which let users open Garageband sessions full of stems from each artist with step-by-step “remix instructions.”

Apple is also releasing a new mini-documentary “Watch the Sound With Mark Ronson.” In the doc, “Oscar- and Grammy Award-winning producer-artist Mark Ronson explores the intersection of technology and musical innovation.” The docuseries comes with a Producer Pack of Ronson’s sounds, allowing users to mix along with the videos.

“GarageBand continues to be a catalyst for music creation — making it easy for novices to get started and for seasoned pros to develop their ideas on the go,” said Bob Borchers, Apple’s vice president of Worldwide Product Marketing. “For this update, we’ve collaborated with an incredible group of artists and producers to give musicians an amazing collection of new sounds to play with, and we hope even more people will be inspired to tap into their creativity and start making music in GarageBand.”

Apple has also added short videos from each producer with “words of encouragement” for new producers and music makers. It’s a direct response to Splice’s growth in the recent past, who recently added tutorials to their sample subscription service.

The sound packs and templates are a free download as part of GarageBand iOS and iPad OS 2.3.11. Find out more over at Apple’s Newsroom.