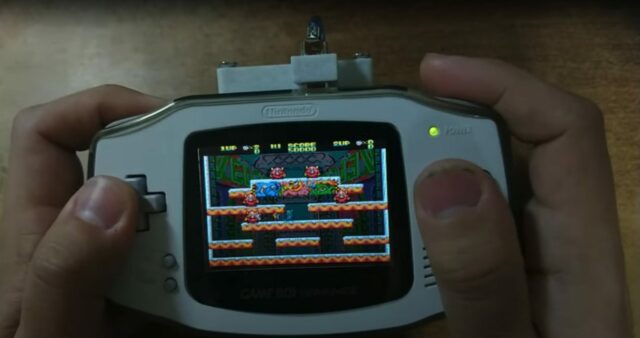 The trick, as one might imagine revolves around a custom cartridge is that the device is technically running the game on a separate system.

You can upgrade the GBA as much as you want, but assuming you’re still using the stock motherboard Nintendo created, it will never be powerful enough to play the same 3D games the original PlayStation could. So Alfonso’s solution was to outsource all of the game processing and rendering to a custom cartridge housing a Raspberry Pi 3 running a PlayStation emulator.

As the Raspberry Pi is quite constraining, you can’t transfer more than 1.6Mbps bi-directionally, and the Pi has to routinely give the “poor” GBA’s processor a break for a few microseconds. Alfonso suggests lowering the stream resolution from the console’s native 240×160 if a high frame rate is important.

Even so, the results are mostly impressive. The special cart can handle classics like the Crash Bandicoot series and Spyro the Dragon at smooth frame rates, albeit with some video artifacts that reflect the limited bandwidth. You can overclock the GBA’s processor to improve the frame rate and quality.

You’ll have to build the cartridge and load code yourself, although Alfonso has helpfully provided both on GitHub. This probably won’t replace a PSP if you want the most authentic PlayStation handheld experience you can get. It might, however, give you a reason to dig your GBA out of the closet.