Latest research from Strategy Analytics shows that global smartphone shipments grew 3% in 2016, hitting a record 1.5 billion units. The iPhone reclaimed its No. 1 spot with 18% global smartphone marketshare in Q4 2016, while OPPO turned out to be the star performer growing 99% annually (via Business Wire). Apple shipped 78.3 million iPhones globally in Q4 2016, rising a steady 5% annually from 74.8 million units in Q4 2015. 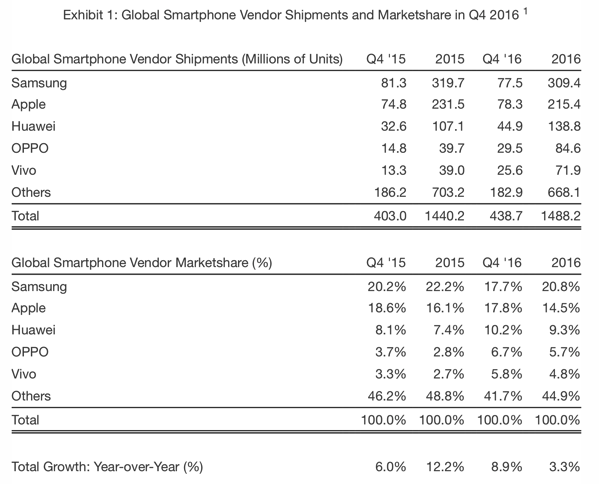 “This quarter was the smartphone industry’s fastest growth rate for over a year”, said Strategy Analytics’ Director Linda Sui, adding that smartphone growth is recovering slightly due to stronger demand in major developing markets like China and Africa. “Global smartphone shipments grew 3 percent annually from 1.44 billion in full-year 2015 to a record 1.49 billion in 2016”, she continued.

“This was the iPhone’s best performance for over a year, as Apple capitalized on Samsung’s recent missteps”, said Neil Mawston, Executive Director at Strategy Analytics. Samsung shipped 77.5 million smartphones worldwide in Q4 2016, dipping 5% annually from 81.3 million units in Q4 2015. Samsung lost momentum in the quarter as a result of its Note 7 battery fiasco.

Linda Sui, Director at Strategy Analytics, added, “OPPO held on to fourth position and grew a robust 99 percent annually to capture a record 7 percent global smartphone marketshare in Q4 2016, almost doubling from 4 percent a year ago. OPPO has grown swiftly in China with popular Android models such as the R9. OPPO’s next challenge in 2017 is to expand beyond China and continue its momentum in emerging regions like India and Nigeria.