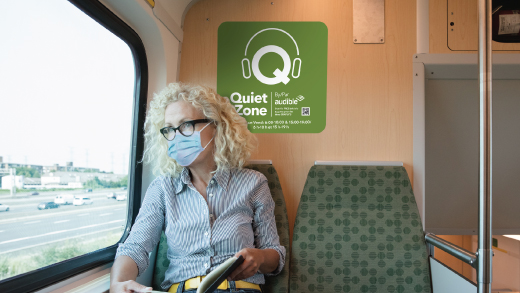 After launching free Wi-Fi aboard GO Trains at the end of September, a new partnership with Audible launched today offering free downloads, announced Metrolinx, which runs trains in the Greater Toronto and Hamilton Area in Ontario.

The upper levels of GO Trains are known as the Quiet Zone (passengers are expected to mute electronics and have headphones on) and this is now sponsored by Amazon’s Audible, which will include some free content available for download.

Metrolinx says a free Audible title will be available up to four times per year. Customers can download free audiobooks by scanning a QR code on signs aboard trains. iPhone users can just point their device’s camera app at any QR code to start the process.

According to a Metrolinx spokesperson in an email to iPhone in Canada, this new partnership will be rolling out over the next few weeks.