Google Inc. has created a new parent company called Alphabet Inc., which it will now be known when it is publicly traded (its two classes of shares will remain GOOG and GOOGL on the NASDAQ). 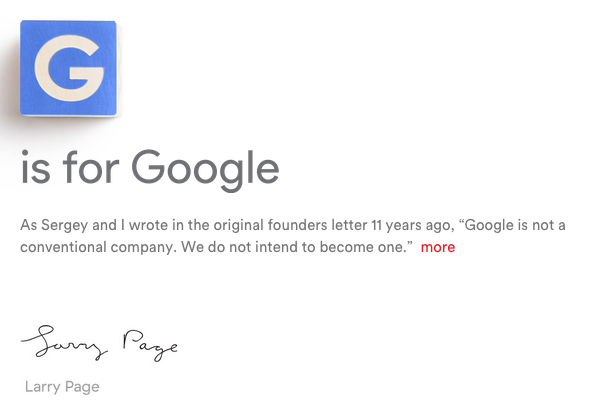 Larry Page and Sergey Brin, Google’s co-founders will head up Alphabet and explained just exactly what their new parent company is:

What is Alphabet? Alphabet is mostly a collection of companies. The largest of which, of course, is Google. This newer Google is a bit slimmed down, with the companies that are pretty far afield of our main internet products contained in Alphabet instead. What do we mean by far afield? Good examples are our health efforts: Life Sciences (that works on the glucose-sensing contact lens), and Calico (focused on longevity). Fundamentally, we believe this allows us more management scale, as we can run things independently that aren’t very related.

Alphabet’s executive team will be led by Brin as president, Page as CEO, and Eric Schmidt as executive chairman.

Page explained in his letter to investors “We liked the name Alphabet because it means a collection of letters that represent language, one of humanity’s most important innovations, and is the core of how we index with Google search!”

It’ll be interesting to see what comes out of this.