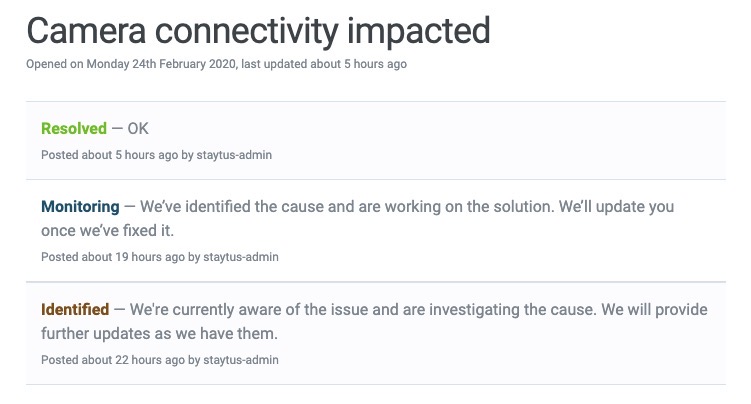 If your Nest Cams weren’t working yesterday, you’re not alone, because the outage was blamed on a “scheduled storage server software update,” says parent company Google.

Yesterday, Nest users were unable to view live streams and record video. But according to Google Nest’s VP, in an update, the issue has been fixed.

Here’s what Google had to say about the error yesterday, according to VP of Google Nest, Rishi Chandra:

Earlier today, Nest cameras stopped working properly, and many of you were unable to record video and see live streams. You depend on Nest cameras to keep an eye on your home and the people in it, so of course it’s frustrating when you can’t. For that, please accept my apology.

We’ve rolled out a fix and most camera services should be working again. Unfortunately, video history wasn’t collected during this incident. If you’re still experiencing any problems, please contact our support team.

Chandra further explains, “We’re still doing some investigating, but at this point I can share that the issue was due to a scheduled storage server software update that didn’t go as intended. Whenever something like this occurs, we carefully look across our systems to figure out how to make sure it doesn’t happen again.”

Update: Notifications should now be restored for all customers, and we’re continuing to work on re-enabling Sightline. We’ll update you again when the issue is fully resolved.

The Nest outage affected users in the United States and Canada. During the outage, no recordings were made, which impacted those relying on recordings such as businesses or others monitoring their pets at home, for example.

According to Nest’s system status page, the issue was completely resolved five hours ago.

Were you affected by yesterday’s Nest outage?