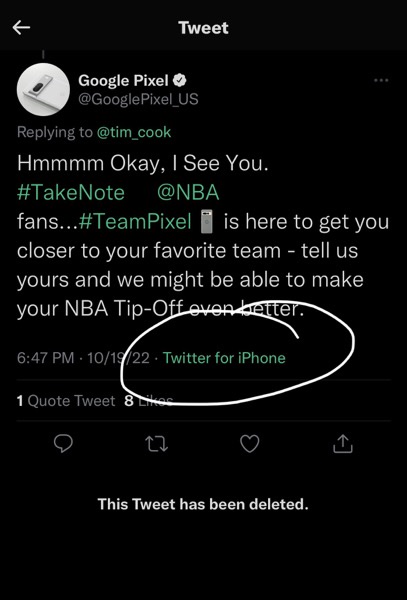 The tweet, which has now been deleted, was originally intended at mocking Apple’s “Take Note” tagline, which drew criticism as the tagline is also being used by the Utah Jazz NBA team.

Apple ended up giving up the animated hashflag for this very reason.

@GooglePixel US:
(Replying to @Tim cook)

Hmmmm Okay, I See You. #TakeNote @NBA fans…#TeamPixel ® is here to get you closer to your favorite team – tell us yours and we might be able to make your NBA Tip-Off even better.

Google thought it would be funny to send a tweet saying that joining “Team Pixel” would help bring NBA fans “closer to your favorite team” than an iPhone would.

But as soon as the tweet went live, Google got called out following which the Pixel team quickly took down the tweet and sent it again via “Twitter for Web.”