According to a report by The Wall Street Journal, Google is faced with numerous challenges in offering encrypted Android smartphones, with certain handset makers resisting merely because of concerns that encryption will hurt their phone’s performance. And due to fear of driving device makers away from the official Android model, where it makes the most money, Google isn’t insisting the manufacturers either. 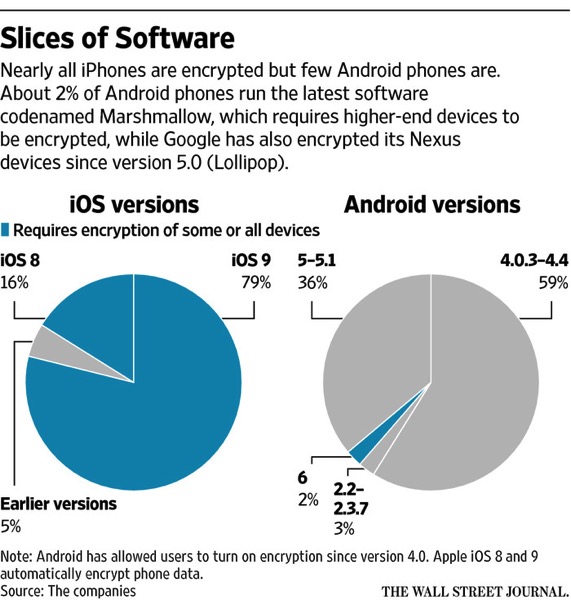 Security experts say that while 95% of Apple’s iPhones are strongly encrypted, less than 10% of the world’s 1.4 billion Android phones are actually encrypted. In contrast to Apple, who urges users to adopt the latest version of its iOS software and promotes the spread of encryption, Google only requires device manufacturers to comply with certain requirements to use Android OS and its key services like search and maps, after which they are free to use the software as they wish.

“There is a push and pull with what Google wants to mandate and what the [manufacturers] are going to do,” said Andrew Blaich, lead security analyst at Bluebox Security Inc., which helps secure mobile apps. In some ways, Google is “at the mercy of the larger (manufacturers) like Samsung and LG that are driving the ecosystem.”

“If there was encryption that didn’t affect usability and performance, then I can’t imagine anyone not wanting to include that feature,” said Ken Hong, a spokesman for LG Electronics Inc.

Meanwhile, Android security chief Adrian Ludwig has stated that Google is aiming to eventually mandate encryption on all Android devices as components get less expensive.