Update 1: Davide Sabine, who shot and uploaded the video just received a message from YouTube about his upload:

YouTube hasï»¿ sent a message to me indicating they’ve received a complaint and they’re considering taking the video offline. This video has been the subject of many (thousands by now) news broadcasts in Alberta, Ontario, Indiana, (that I know of). Is this a matter of personal privacy? Or a matter of public interest? 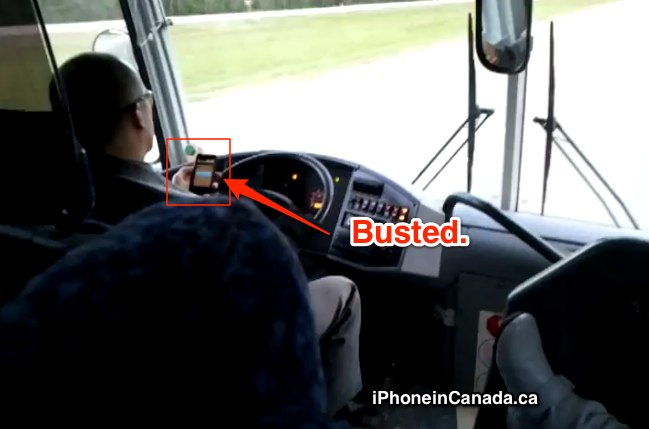 Greyhound is investigating after one of its drivers was caught on video playing with his iPhone. In the video below, you can clearly see the employee fiddling with his iPhone while operating the bus–clearly a dangerous situation.

The passenger who recorded this video tried unsuccessfully to relay her concerns to Greyhound, after the trip was over (as described in the YouTube video description). The staff at the station dismissed what she had to say. Since there was no legitimate response to her claims, she posted the video up on YouTube:

I recorded just a few minutes but I watched this for at least 10 minutes before getting my camera ready. Prior to that I was asleep so I don’t know how long or how often the driver was messing with his phone throughout the trip. I became very anxious a few times while on single-lane highway but I started the video only after we hit the 4-lane divided highway just south of Fort McMurray. In the time that I observed him he read txt messages, flipped through photos, flipped through the settings and configuration of his camera, and snapped a dozen or so pictures of the sunrise out the East window â€” gently swerving over the lines the entire time.

Unbelievable. I wouldn’t want to be on that bus, knowing my driver could be distracted with his iPhone. Laws in BC already ban the usage of cellphones during driving.

Have you ever witnessed a bus driver using their cellphone while driving? It’s definitely a scary situation since so many lives are at stake.

LG is expanding the availability of Apple TV, Apple Music, AirPlay, and HomeKit support on third-party webOS Hub-enables displays. Over 100 countries and regions will now be able to take advantage of Apple's entertainment options on a growing list of third-party displays. Apple's apps such as Apple TV are currently available on LG's display and...
Steve Vegvari
4 mins ago