Roughly a week or so before iOS 6 beta 3 was released to developers, Apple enabled turn-by-turn directions read by Siri in Canada, which did not work before.. Apple describes the feature as:

Find your way to your destination using turn-by-turn spoken directions, a 3D view, and real-time traffic information. As you approach a turn, Maps speaks directions, so you can keep your eyes on the road. In addition, the screen turns into a 3D perspective view of the road ahead. Large signs and arrows superimposed over the image show you which way to go and how long it’s going to take to get there — even if your screen is locked. As you approach a turn, the camera angle changes dynamically to show you where to go. If you miss a turn, don’t worry. Maps automatically reroutes you and updates your ETA.

Now, if you’re out of the Maps app and using another app such as iPod, when you approach an upcoming turn a banner alert will pop up as seen below (via @rsykes77) on top of Siri providing audio directions: 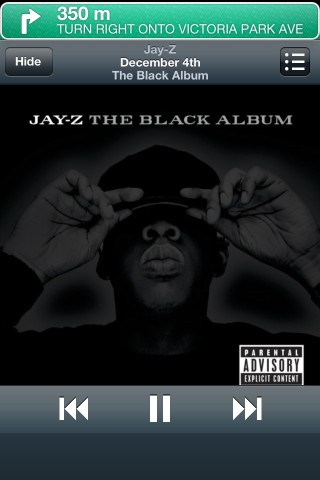 This is just another way Apple Maps ensures you know when to make your turns during navigation. iOS 6 is set to be released this Fall, most likely announced alongside the rumoured next generation iPhone with a thinner screen.