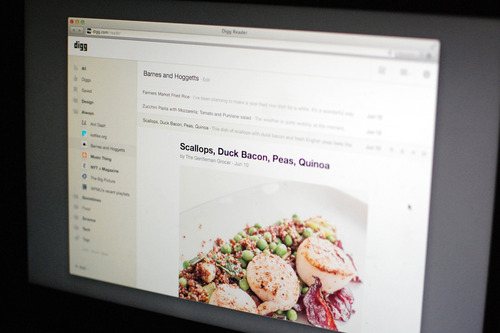 The Verge has shared a video of an early hands-on with Digg Reader, the upcoming Google Reader replacement set to launch on June 26th. Check it out below:

The Digg team spent 90 days building their RSS reader and the entire detailed story of how it was accomplished can be found over at Wired. Here’s a snippet from this lengthy article worthy reading on Sunday morning:

McLaughlin saw a blog post in the Fall of 2012 speculating that Google Reader, choked of resources, was shutting down. He sent a teasing note to a friend at Google offering to “take it off their hands.” To his surprise, he got a serious reply. Google, his friend replied, had concluded that it couldn’t sell the name, user data, or code base (which would only run on their servers) and so there was nothing to actually buy.

The following February, McLaughlin, now full-time at Digg, bumped into this same pal at a TED conference. The friend warned him to act fast if he really did want to develop a Reader. “He said ‘I’m not telling you anything, but we’re not going to keep this thing around forever and maybe you want to have something ready by the end of the year.”

But instead of year’s end Google announced plans to shutter Google Reader on July 1. That same night, Digg put up a blog post announcing that it was going to build a replacement. The Internet went crazy.

Feedly already has their cloud infrastructure in place to replace Google Reader. It’ll be interesting to see how the final version of Digg Reader will compete with the latter. Regardless, even though Google Reader is set to die a slow death in a fire, we’re optimistic new and better replacements will make their way out shortly.