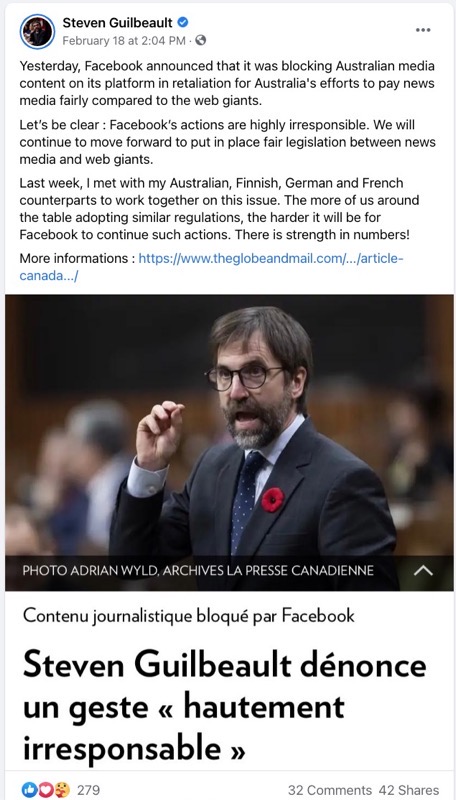 Last fall, Canadian Heritage Minister, Steve Guilbeault, argued it was “immoral and unacceptable” for people to share news story links on Facebook, as the social media giant benefits, without providing fair compensation for Canadian media content, as pointed out by the University of Ottawa law professor, Dr. Michael Geist.

Dr. Geist has written a follow-up post to now point out Minister Guilbeault appears to be guilty of not practicing what he preaches. The Minister, along with other MPs, have used Facebook Ads for advertising, while Guilbeault has shared numerous news story links and videos on Facebook as well, directly contradicting the practice he has been arguing against, explains Dr. Geist:

More difficult is Guilbeault’s regular posting of news articles and videos on Facebook, where over the past year he has shared more than a dozen articles and posted at least ten videos that use third party broadcaster content. The shared articles come from a wide range of news sources including the Journal de Montreal, La Presse, Global News, and the Toronto Star. Given that there was no payment for these links, one wonders if Guilbeault thinks these are also immoral.

Moreover, Minister Guilbeault has also shared videos on Facebook—but by copying them and posting directly, without giving credit to original broadcasters, a practice known as ‘ripping’. Dr. Geist says Guilbeault has done this many times, such as sharing a 14-minute clip of himself speaking on Toute le Monde en Parle. The shared video on his Facebook page does not link back to the media organization whatsoever.

“Did he obtain permission or a licence? Does he think that posting a full 14 minute video is fair dealing? In fact, he’s done the same thing many times, including to videos he has copied and uploaded where he is criticizing the Internet platforms for their practices. Perhaps a closer examination of his own social media practices are in order,” concluded Dr. Geist, who holds the Canada Research Chair in Internet and E-commerce Law at the University of Ottawa.

Last month, Facebook banned Australian users from accessing and sharing news links, after the government said it would force the social media giant to pay for the practice. Eventually, both parties agreed to work out an ongoing deal and the news linking ban was lifted by Facebook.

Canada last month said it would make Facebook pay for news content, saying it would not back down if the same situation happened here like it did in Australia. The Australian model wants Facebook and Google to pay media organizations for the news stories shared online.

Minister Guilbeault said to reporters at the time, “Canada is at the forefront of this battle … we are really among the first group of countries around the world that are doing this.”