Citing two people in law enforcement, a report by NBC News is claiming that Grayshift, a company that makes iPhone-cracking devices for law enforcement agencies, has developed a new software called ‘Hide UI’ that can track a suspect’s passcode when it’s entered into a phone (via Daring Fireball). 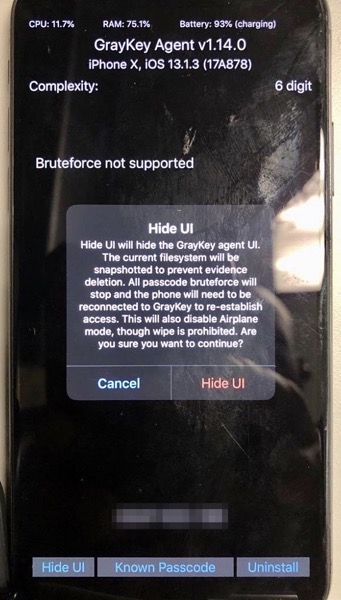 Law enforcement officials are known to use a device called GrayKey, which is a small box with two iPhone lightning cables sticking out of it. Any recent model of iPhone can be plugged into the cables to install an “agent” software, which then attempts to crack the passcode while offering an estimate for how much time it might take.

According to calculations by cryptographer Matthew Green, the software can take minutes to crack a four-digit pin and less than a day to crack a six-digit pin. For eight- and 10-digit passcodes it can take weeks or years.

It is under these circumstances that Hide UI provides a way to get access to the device more quickly.

“If the standard agent doesn’t work, we can move to Plan B, which is Hide UI,” said one law enforcement professional familiar with the system.

In order for this feature to work, law enforcement officials must install the covert software and then set up a scenario to put a seized device back into the hands of the suspect, said the people familiar with the system.

“It’s great technology for our cases, but as a citizen I don’t really like how it’s being used. I feel like sometimes officers will engage in borderline and unethical behavior,” the law enforcement official said.

The screenshot of an iPhone X with Hide UI installed (shown above) reveals that the spyware also disables airplane mode and prevents anyone from wiping the device.

Apple has declined to issue a comment regarding Grayshift developing such technologies for law enforcement agencies.