If you have been using the new time-lapse camera feature in iOS 8, you may be wondering how it determines photo intervals to take and how it is able to process a final video that doesn’t sap up the storage on your iOS device. Apple explains it as “iOS 8 does all the work, snapping photos at dynamically selected intervals.” But what does that mean?

Studio Neat—the makers of of Frameographer—investigated with their own tests and here’s what they discovered:

What Apple means by “dynamically selected intervals” is they are doubling the speed of the time-lapse and taking half as many pictures per second as the recording duration doubles. Sounds complex, but it’s actually very simple.

This is an efficient way to assemble a time-lapse. When you start recording a time-lapse, the app only captures 2 frames per second. If the recording period extends beyond 10 minutes, the app switches to capturing only 1 frame per second, and deletes every other frame it had captured in the first 10 minutes. When the recording duration doubles (20 minutes), the same thing happens. Now the app is only capturing 1 frame every 2 seconds, and previous frames are dropped to match this tempo. And so forth. The longest video I recorded was 8 hours, but presumably using this method you could record for much longer (Apple’s website casually mentions 30 hours). Because the app is being so efficient with frame capture and storage, you don’t need to worry about your phone capacity filling up.

The chart below illustrates how it all goes down: 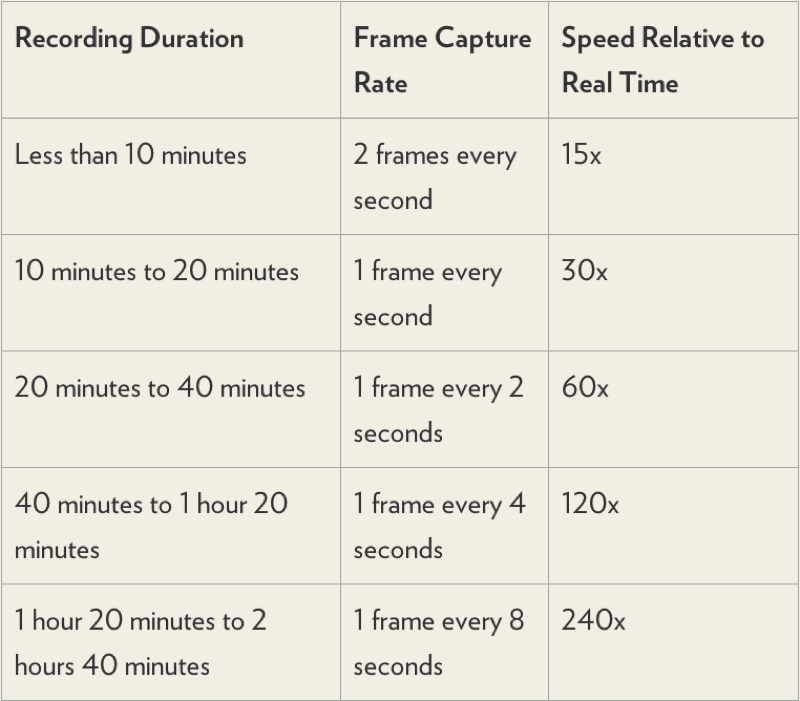 To demonstrate their discovery, below is a 5 minute time-lapse video recorded by Studio Neat but the resulting video is 20 seconds long:

This is pretty smart. Have you been using the time-lapse feature lately? It’s best to try it with your iPhone on a tripod or stationary before recording, or else people watching your final product will get nausea.

The display technology experts over at DisplayMate have crowned the iPhone 14 Pro Max's screen the best to ever grace a smartphone, giving it their highest-ever A+ rating and "Best Smartphone Display Award." DisplayMate is one of the world's leading authorities on display technology. The corporation's reviews and reports are based on comprehensive, objective laboratory tests...
Nehal Malik
26 mins ago