Apple Stops Sharing How Much it Spends on Advertising

As pointed out in a recent research note by analysts at Wells Fargo, Apple has suddenly stopped sharing any information regarding the amount of money it spends on advertising, Business Insider is reporting. It’s also not yet clear why Apple chose to stop disclosing that info, although analysts say that’s a shame as it was useful to track Apple’s advertising expense, and its ad spend as a percentage of revenue over time. 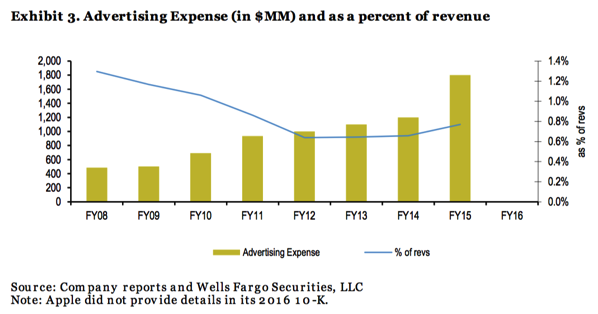 Apple’s decision to stop sharing how much it spends on ads comes a year after the company’s advertising expenses rose 50% to a record $1.8 billion last year. In a section entitled “advertising costs”, Apple simply states: “Advertising costs are expensed as incurred and included in selling, general and administrative (SG&A) expenses”.

Wells Fargo’s analysts believe that Apple ended 2016 with its lowest operating margin since 2009, which could be in part “due to Apple spending more ad dollars to drive total revenue”.

So why has Apple stopped making its ad spend public? The company doesn’t say in the annual report. Logic would dictate that Apple’s ad spend hit another record high in 2016 and, because it was spending more on ad costs per sale, the company decided it would look better not to make this figure public.

Apple says in the annual report (emphasis ours): “The decrease in selling, general and administrative expense in 2016 compared to 2015 was due primarily to lower discretionary expenditures and advertising costs, partially offset by an increase in headcount and related expenses.” But that doesn’t quite tell the full story. While SG&A expenses were down year-on-year on a dollar basis, S&GA expenses as a percentage of overall sales were up one percentage point to 7%.

Companies are not required to disclose advertising spend from their general SG&A expenses figure, and most firms don’t want to share that data with their competitors.