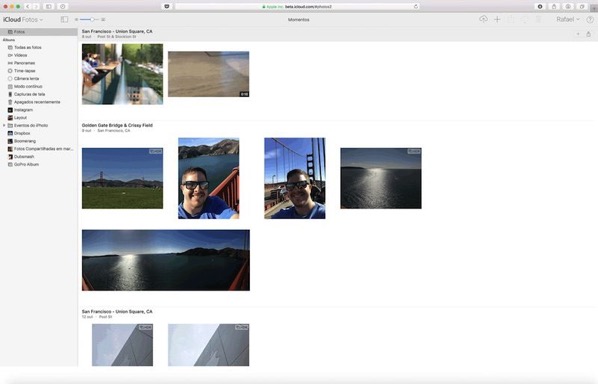 As discovered by MacMagazine (via MacRumors), the iCloud beta website has been updated with a redesigned Photos section, which offers improved navigation tools similar to the native macOS Sierra Photos app. The revamped Photos section features a navigation sidebar, displaying all the albums which makes it easier to move between photo collections.

In the current iteration of iCloud.com albums are found in a tab bar at the top of the Photos part of the website, next to a user’s moments. With the update, users are also able to choose multiple photos from the new album select toolbar “and use the action buttons in the upper right corner to add, share, download, or remove albums.”

When a user clicks on a specific photo, the updated Photos section shows a scrollable thumbnail view of the entire album’s contents, making it easier to navigate through large photo collections.

It is not yet known when the the new changes will be launched on iCloud.com for general public, having recently debuted on the beta website.

In partnership with Huish Outdoors, Apple has released the new Oceanic+ dive app for the Apple Watch Ultra, which the company has been highlighting as the closest thing to an ‘official’ Apple dive app. In a detailed hands-on review of the Apple Watch Ultra and the Oceanic+ app, the folks over at DC Rainmaker have...
Usman Qureshi
34 mins ago