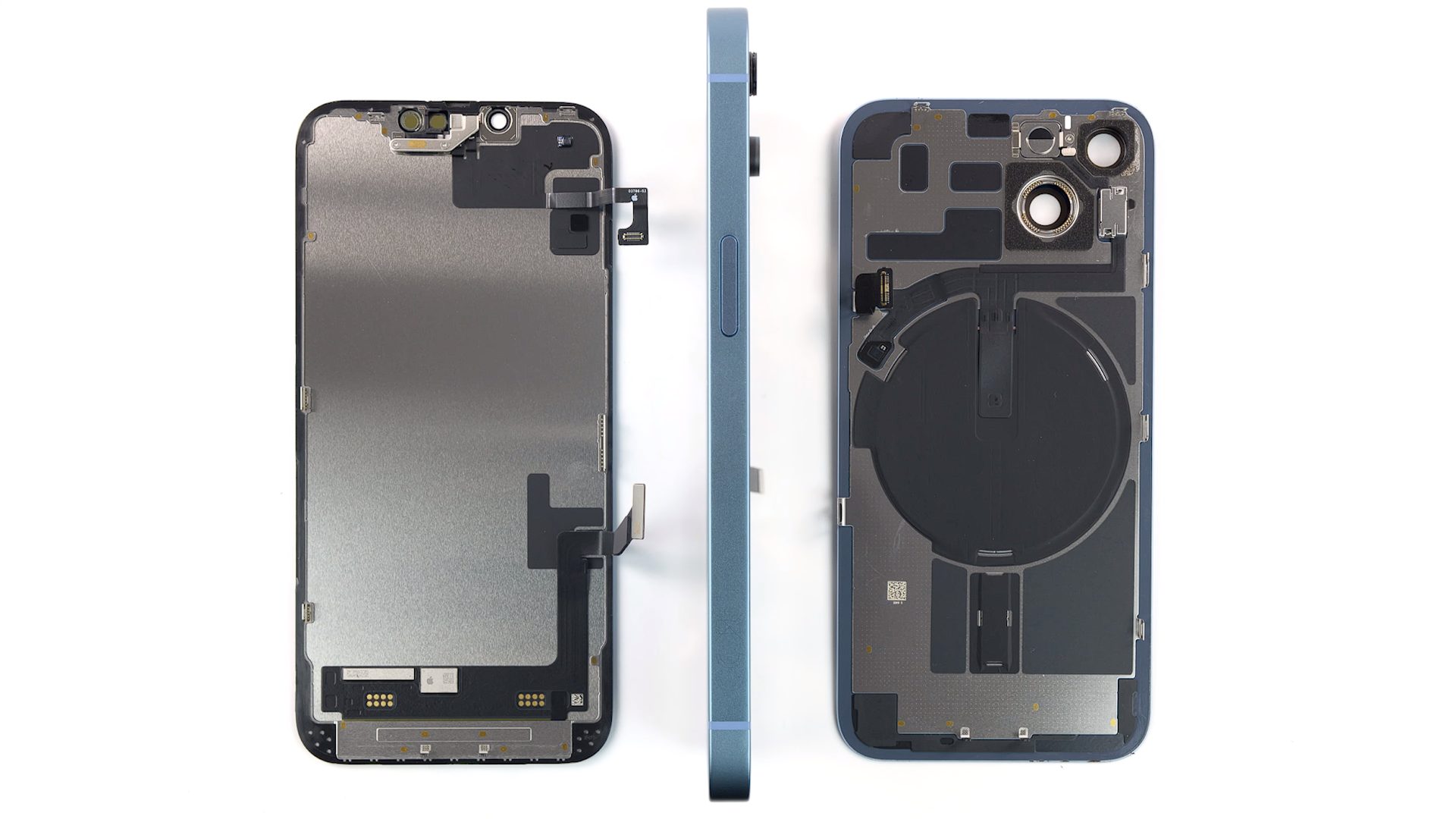 iFixit today published its complete teardown of the base iPhone 14, and the repairability experts were pleasantly surprised by what they found inside.

“We discovered a big secret sealed inside Apple’s iPhone 14, and our teardown reveals exactly what it is,” iFixit wrote in the description of its teardown video.

The model that reviewers dismissed as boring—an iPhone 13S, basically—actually has the most radical upgrade of any of Apple’s new phones. It turns out that Apple has totally redesigned the phone from the ground up, and that redesign may make this its most repairable and sustainable phone in years.

“The feature that is most exciting about this phone is one that Apple didn’t tell anyone about,” said the iFixit rep hosting the video.

When iFixit pried off the iPhone 14’s screen, which with predecessors revealed their internals, what they found was a metal shield separating the display from the rest of the phone. This is where you can disconnect the display (and only the display), which should streamline screen repairs and make them easier.

Instead, to access the rest of the iPhone 14, you need to open it from the back. Like the screen, the glass panel on the iPhone 14’s rear can also be lifted up (once the adhesive is weakened with heat, of course). This was not the case with the iPhone 13 and older.

The back also opens like a book, and the glass panel can be removed after disconnecting ribbon cables for the antennae and MagSafe charging components. Laid out inside are all of the iPhone 14’s internal components, but mirrored as compared to its predecessors. 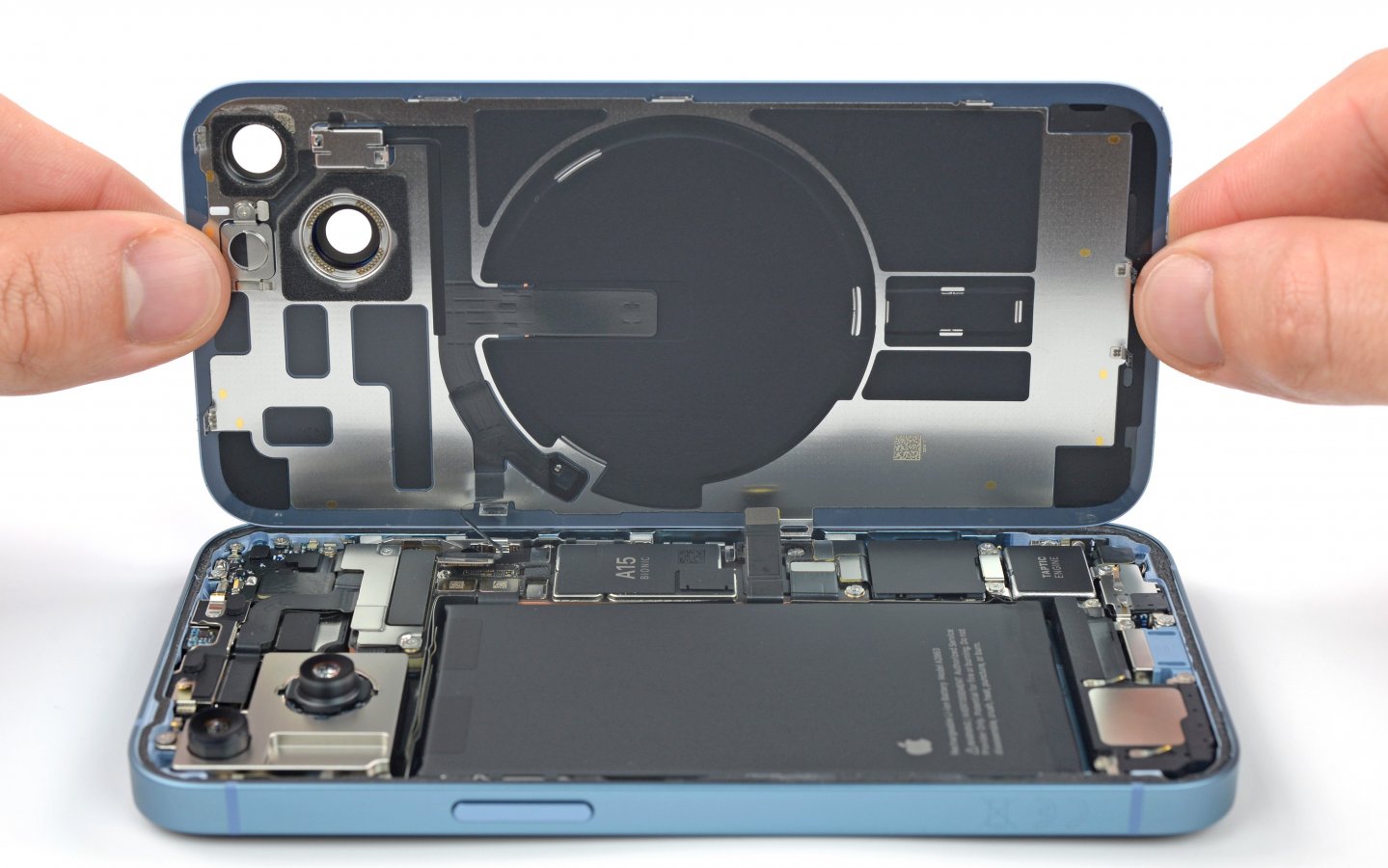 “This is the most substantial iPhone redesign since the X,” said the video host. The change means that back glass replacements, once incredibly complicated on iPhone 13 and older, are not only possible but also much easier on iPhone 14. Apple is also expected to release DIY repair manuals for iPhone 14 and iPhone 14 Pro shortly.

“This is impressive stuff. Apple deserves a gold medal for this,” added iFixit’s teardown expert. Apple is infamous for its walled-garden approach to both software and hardware, so this degree of reparability from the company is a breath of fresh air. A surprise, to be sure, but a welcome one.

iFixit did, however, note that replaced back glass panels will, like many other components in Apple devices, need to be paired with the phone and activated after installation.

Apple’s entry-level iPhone 14 earned a “Repairability Score” of 7/10 from iFixit, the outlet’s best score for an iPhone since 2016’s iPhone 7.

You can check out iFixit’s full iPhone 14 teardown video below:

In addition, you can check out iFixit’s blog post for a deeper dive into its iPhone 14 teardown. iFixit isn’t done with its iPhone 14 Pro Max teardown just yet, but YouTuber PBKreviews posted one last week to give us our first look at the flagship’s innards.

If you’re convinced that the iPhone 14 really is the model to buy this year (it’s definitely the least expensive), click here to order yours today.