Created by Android app developer Daniel Zweigart, an unofficial app named iMessage Chat for Android has been released in the Google Play store that allows Android users to communicate with iPhone, iPod touch and iPad users over Apple’s iMessage network. According to 9to5Mac, a few users who have tried the app, claim that it actually works. 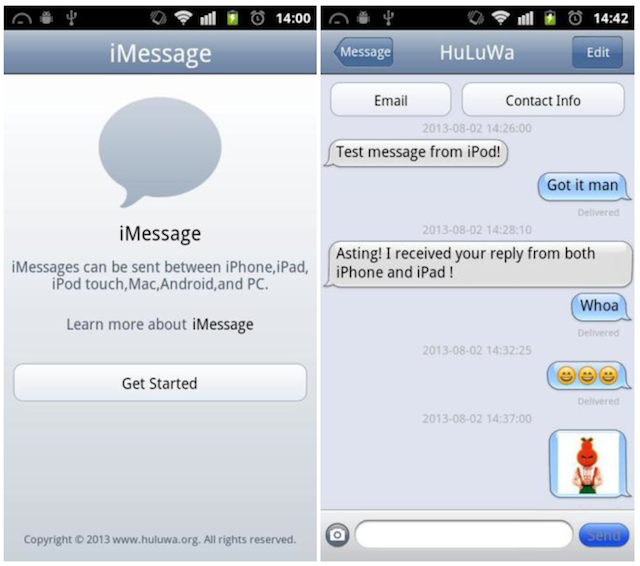 However, serious security concerns have been highlighted by TechCrunch over the unofficial iMessage Android app that uses Chinese servers to process the data. It has been reported that the questionable techniques used to send the messages between the two platforms are “not best practice”, and also mean that “Apple can’t simply block the app based on its IP address”. According to the app’s Google Play page, it was released earlier this month and has been downloaded over 10,000 times.

Meanwhile, renowned iOS jailbreaker / hacker @pod2g has warned users not to use the fake Android iMessage app as it canbe used to extract your AppleID and password:

Please do not use this Android iMessage app, never ever! They can grab your AppleID and password! It can’t be worse.

Also, software developer Adam Bell has revealed that the app connects to Apple’s iMessage server posing as a Mac mini:

Similar warnings have been issued by Saurik (Jay Freeman), Steven Troughton-Smith and other developers as well on Twitter.

So, no matter how tempted you feel to try this one on your Android device, DON’T!