PieMessage is a new open source project that enables cross-platform iMessage support and allows users of Android smartphones and tablets to send iMessages to iOS users, 9to5Mac reports. While the PieMessage app has not yet been released to public, the video embedded below shows a prototype version of the app in action. PieMessage developer Eric Chee has also released the code on GitHub today. 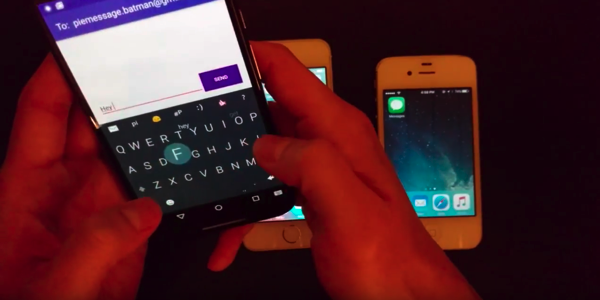 While there have been similar iMessage solutions in the past for Android users, none has really worked for long since they have all used a third-party server to route messages, raising security concerns among users. PieMessage on the other hand uses Mac and an OS X client as a server, allowing users to use their own Mac computers instead of relying on third-party hosted servers. In the GitHub project, there is an OS X client and an Android client as well as “messages.applescript”, which according to the developer, is the most important part of the project.

Basically what the Android client does is send the text to a macbook. And uses the Mac’s “Messages” app to send off the notification. When the Mac detects an incoming message, it will pass it back to the Android. So yes there is both software you need to run on a Mac and Android. I have an old 2007 macbook that is just always on connected at home that serves as its client…

Check out PieMessage in action below and tell us what you think: