Instagram May Soon Let Users Pin Posts to Their Profile

According to a report by TechCrunch, Instagram is testing a new feature that allows users to pin some posts to their profile above the photo grid. The feature’s existence has been confirmed by Instagram and is currently showing up for select users. 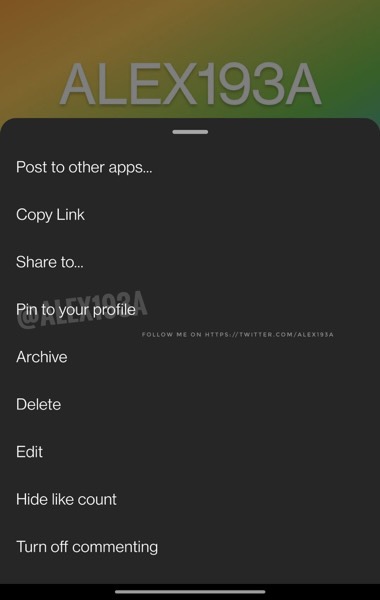 The new “Pin to your profile” feature lets Instagram users select the option from the three-dot menu next to posts. Users who have access to the feature can pin specific posts to their profile, allowing them to highlight their favorite posts that may have been buried down in their feed.

At the moment, users can only pin Stories to their profile, but this new feature would expand this ability to posts. The feature will prove useful for creators who post frequently but want to highlight a specific post.

Although you can currently highlight a post in a Story and then pin that story to your profile, this new feature would make that process a lot easier and more straightforward. It’s worth noting that the feature works similarly to Twitter’s “Pin to your profile” feature that lets you pin a tweet to the top of your personal feed.

The pinned posts test comes roughly a week after Instagram announced that may remove the “Recent” tab on hashtag pages.

As Canadian Tire turns 100, it is entering the world of virtual reality (VR) with a Virtual Tree Decorator and a limited-edition 100th-anniversary NFT. The Virtual Tree Decorator is a virtual reality experience that lets you experiment with Christmas tree decor online and bring your dream tree to life. You can design your magical Christmas...
Usman Qureshi
21 mins ago

Google has today announced another Pixel Feature Drop with updates across the Pixel smartphone lineup and the Pixel Watch. The updates are rolling out now on Pixel 4a through the latest Pixel 7 and Pixel 7 Pro. Here are all the new features coming to Pixel devices. New features for Pixel Phones VPN by Google One: Pixel 7...
Usman Qureshi
48 mins ago