Despite TikTok’s popularity, Instagram became the most-downloaded app in Q4 2021.

TikTok may be the trending app of the moment, but Instagram usage is still growing, especially in India, where TikTok is still banned, and Instagram Reels has taken its place as a key video platform of choice.

That’s according to the latest data from Sensor Tower, which has published its Q4 2021 app performance tracking report, which shows that Instagram had its best quarter for downloads since 2014, with app installs rising 10 percent over Q3.

The Meta-owned photo and video sharing app was also the first Meta app to take the number one position on the top downloads chart since WhatsApp held that spot back in Q4 2019. 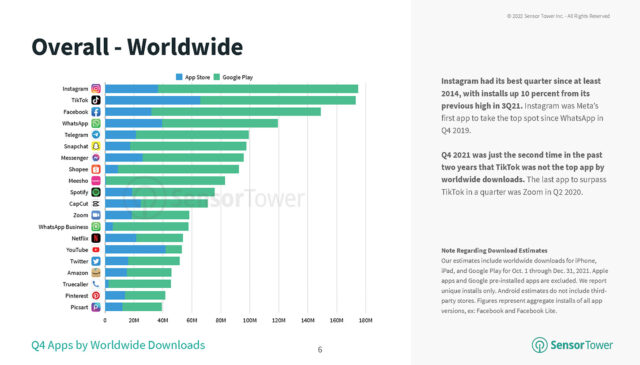 In fact, Q4 2021 was only the second time in the past two years that TikTok wasn’t the number one app by worldwide downloads, the firm says.

The only other time that TikTok dropped from its top spot was back in the beginning of the pandemic, when Zoom jumped ahead to become the most downloaded app in Q2 2020.

39 percent of Instagram’s downloads in Q4 came from India, where Meta has been pushing Instagram as the best alternative for TikTok, which, at one stage, had more than 200 million Indian users, before it was banned by the Indian Government due a border dispute with China.

India’s digital transition is still in a relatively early phase, and if Meta can get in now, it stands to glean significant benefit from that presence, and Instagram now looks to be providing a key connector to its various offerings, including business discovery, eCommerce, and more.

And it also helps to boost Instagram’s overall numbers, as TikTok continues to rival the app for young user attention — though it is also worth noting that TikTok was still the most downloaded app on iOS by a long way.