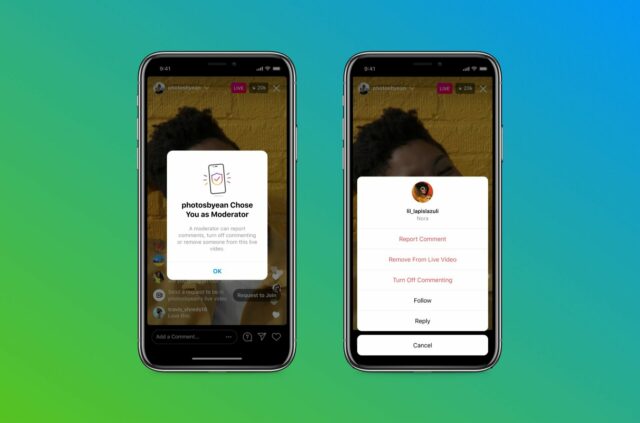 Livestreamers on Instagram will soon have the ability to assign moderator roles to other users. The company announced that mods will be able to help monitor the stream and viewers.

Instagram announced that moderator support is arriving via Twitter. As a part of the new feature, moderators will be able to report comments, remove viewers from watching the Live stream, and turn comments off for a specific viewer.

We’re launching Live Moderator on Instagram Live, where creators can assign a mod and give them the power to:

✅ Report comments
✅ Remove viewers from Live
✅ Turn off comments for a viewer pic.twitter.com/S9j7s4dInB

In order to assign a user a moderator role, the livestreamer must navigate to the three-dot menu in the comment bar of a Live. They can then choose a mod from a list of suggested accounts of use the search bar to find specific users if they choose to do so.

Instagram Live has been supported since its 2016 introduction. Since that time, streamers have been asking for dedicated moderator support. Though, this is the first instance of the company providing such a feature. Many other livestream platforms such as Twitch and YouTube have dedicated mod support. These moderators can help cool the comments from harassment as the streamer focuses on their content.

Instagram may likely be introducing mods in order to incentivize more users to utilize the Live service and make streaming a core service of the app.